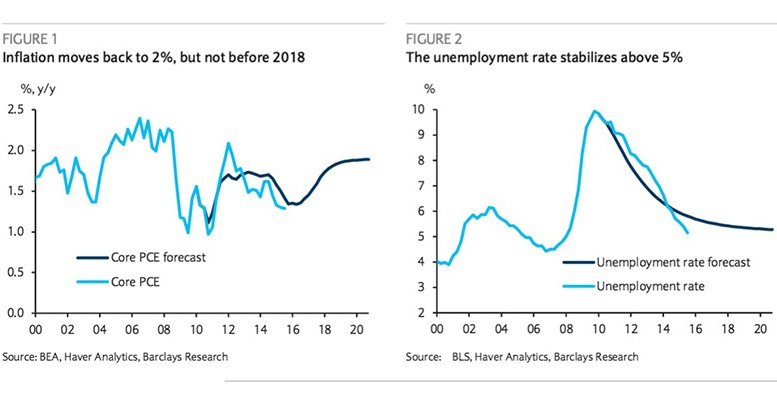 Our outlook for inflation reflects a tug of war between domestically generated price pressures and drags from a softer global outlook, a strong dollar, and falling energy and commodities prices. Despite its transitory nature, external disinflation is likely to last longer than first expected , and we believe it will now take much longer for PCE inflation to return to the Fed’s 2 % target.

Supporting our outlook for faster wage growth and, in turn, stronger services inflation, is the output of our model that jointly estimates wage inflation, core PCE inflation, long – run inflation expectations, productivity growth, and the unemployment rate, among other variables .

Given our macro forecast, which includes the unemployment rate falling below 4% in mid – 2017, modest further appreciation in the dollar, inflation expectations anchored at 2 %, and a modest pickup in productivity growth, we forecast the Employment Cost Index will reach 3.0% q/q saar in 2016 and 3.5% by Q4 17.

Our forecast is predicated on a very rapid decline in the unemployment rate. While this pace is consistent with the historical record, it is considerably faster than that assumed by the FOMC.

According to our estimates, if the unemployment rate does not fall much below current levels over the next two years, the inflation rate will not return to 2% even if inflation expectations remain well anchored.

If inflation remains below target for an extended period, inflation expectations may well drift lower, which substantially reduces the likelihood that inflation returns to the FOMC’s target.

Therefore, while the FOMC may be uncomfortable with historically low levels of the unemployment rate, a significant undershooting of unemployment may be necessary to support wage growth, bring inflation back to target , and prevent inflation expectations from slipping lower.