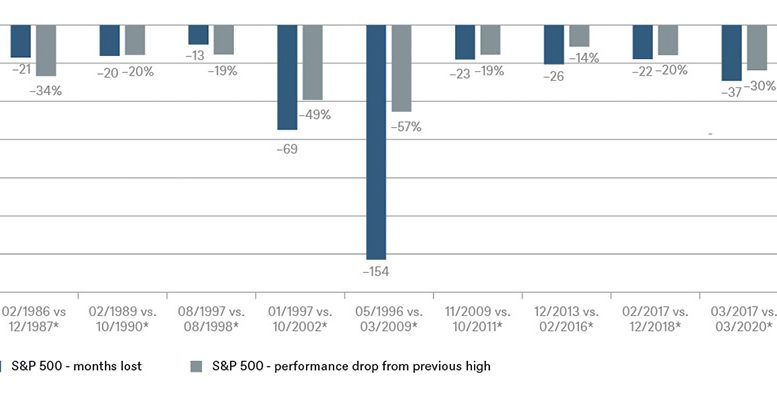 Just one month. On February 19, the S&P 500 reached its record high of 3,393.52 index points. On February 24, the U.S. President tweeted that the United States had largely controlled the coronavirus and that the stock market was starting to look good. The more important misjudgement in Trump’s assessment in our opinion is related to the virus. The United States lost weeks of possible preparation time and now suffers from a rapid spread of the virus.

In the meantime, the President is, at least, not alone in being wrong regarding the equity markets. The S&P 500 has dropped by 30.25% from its high. Quite a number, without question. And in all probability, it could get worse. But how does this crash compare with other major market corrections during the past 35 years?

As we see in our “Chart of the Week,” the performance loss is not yet high enough to make it to the top but third place is within reach. To match the financal crisis of 2008/09, the index would have to lose another 40% or so and sink to 1,450 points. We think that the current correction is – so to say – not quite up to that, as young, however, as it still is.

But there is another way of assessing a market crash – by considering how long it took the index to build up the gains that have been swept away. In other words, how many months of saving were lost in the correction? Well, the current level of the S&P 500 was first reached in March 2017. Therefore 37 months of price gains have gone down the pan. The record, however, is 154 months, which were lost in the correction that took place between late 2007 and March 2009. What about Germany’s Dax? We are now at the levels last seen in May 2013 – an almost seven-year retreat. However, the Dax is a performance index that includes dividends. For the Dax price index (excluding dividends), as well as for the Euro Stoxx 50 and the FTSE 100, the picture is much gloomier: these indices first traded at current levels in 1997/1998. The S&P 500 performance index, on the other hand, is trading at levels first seen in September 2017. Not a big difference to the original price index.

We have made the following four observations: