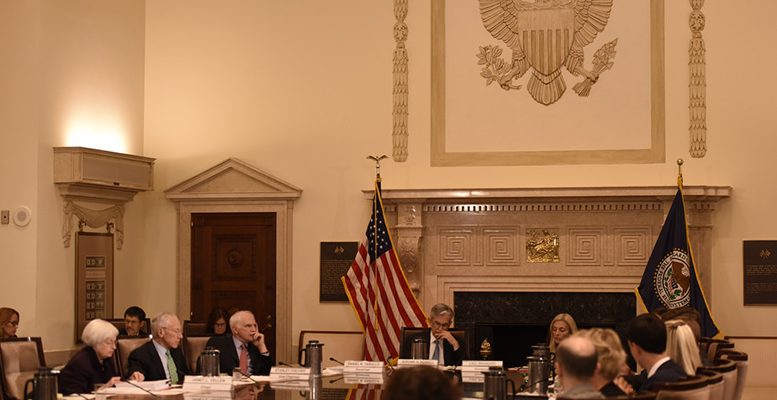 Investors do not expect the Fed to move on rates on Wednesday meeting. There is only a slim 20% support for this view, as hopes for a strong recovery were dashed by recent disappointing data. The widely expected hike may have to wait until the Presidential elections are over.

Many observers blame the Fed for following a cycle-driven policy, paying little attention to the huge liabilities mushrooming in most balance sheets. Yet ever since it embraced the tightening credo, the Fed has carefully avoided any measure which could potentially cripple the debt market. The December rate move, the only one to date, was coupled with a firm commitment to keep existing assets on its books till maturity, thus preventing any risk of widespread turmoil in the financial markets.

Others blame the Fed for keeping behind the curve, as the core inflation shows a slow but sustained upward trend. Undoubtedly it shudders at the mere prospect of taking a false step that could cut short the ongoing shallow recovery. It still has a vivid memory of the blunder which turned a deep recession into the 1930s Big Slump.

Investors, for their part, openly dislike any move by the Fed to recover normal monetary conditions. All they want is to enjoy an easy money environment and ever increasing asset values, with no regard to the ultimate consequences. They are not impressed by the risks inherent in feeding bubbles which could implode, betting on their ability to pull out of the market before it plunges. An upbeat view that all too often proves to be completely wrong. Any crowded emergency exit can easily become a deadly trap.

Whatever decision the Fed takes, it will fail to satisfy analysts and investors alike. Should it refrain from raising rates, it will come under attack for its dovish stance. Should it pull the trigger, it would receive an indictment for sheer recklessness. But for all the fuss over the rates gamble, its outcome seems largely irrelevant. As long as the Fed eschews any attempt to drain the liquidity glut, its monetary stance will continue to play a thoroughly accommodative role, depriving it of all but a moral guidance over the economy.