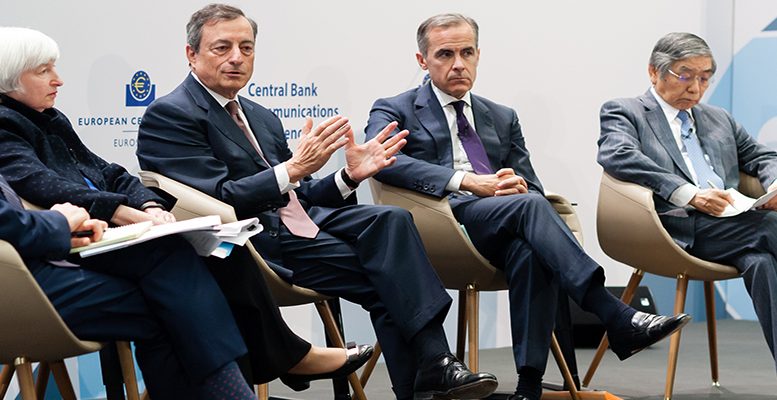 There’s not often the opportunity to listen to Draghi, Yellen, Carney and Kuroda all on the same day. But, as was to be expected, the central bankers meeting held in Frankfurt yesterday did not provide any surprises and focused on the predicted script regarding the communication and orientation of the central banks’ message to the market. They were very formal and will not reveal any changes with respect to the announcements made in the past weeks.

These are the most notable aspects dealt with in the meeting:

1) The four central bankers committed to continuing to “give open guidance” on future decisions as they slowly withdraw monetary stimuli. Draghi described this guidance as a “tool in working order”, while Yellen highlighted the importance of linking these well-known guidelines to the scenario.

2) They stressed that, as history shows, preparing the ground for reducing stimuli is not always an easy task (Bernanke in May 2013 or, more recently, Draghi in June…)

Taking into account the different stages each of the central banks finds itself in the normalisation process, the chairmen of the ECB, Fed, BoJ and BoE agreed on the following points:

The wording will be key: “forward guidance” has been shown to be efficient and has itself become a monetary policy tool; “forward guiance” should be conditioned by and dependent upon the outlook for the economy. Here, reference is being made to the ECB (they say they are thinking about doing something but reserve the right to change their mind if circumstances change). And predictability and “gradualism” may not in fact be virtues if they are seen as a commitment, because this could lead to investors assuming  too much risk.

Kuroda, in particular, insisted on keeping the message simple to avoid misunderstandings (“KEEP IT SIMPLE”).

For his part, Carney emphasised the importance of getting the message out to the general public, not just the capital markets (institutional investors).

Another issue on the table during the conference was Germany’s constant criticisms of the ECB for its stimulus policies and negative interest rates. Draghi diplomatically answered that the only thing he can do, apart from continuing to send a message which he believes is the correct one, is to be “transparent and use all the channels possible to transmit it.”

How capable the central banks are going to be from now on in communicating their next monetary policy moves, especially how and at what pace they plan to withdraw the monetary stimuli they have maintained over the last few years, will depend to a large extent on the reaction from the developed financial markets.

Link Securities analysts explain that any false or badly communicated move could feasibly generate a lot of tension in the markets, accustomed  to (hooked into) the “high levels of liquidity” injected by the global monetary authorities.

“In this sense, the many voices of members of the governing councils of the ECB or the FOMC, who very often contradict each other, don’t help the markets. We agree with what Yellen said yesterday, that multiple voices can confuse investors. Thus it would not go amiss if some of these civil servants chose to abandon the role of “media stars” and kept the low profile their position requires.”

In short, nothing that has not already been said. Intermoney experts conclude that “this led us to stick with a different proposal from the BIS: perhaps too much gradualism and predictability can be a perverse incentive for investors to take on an excessive risk.”