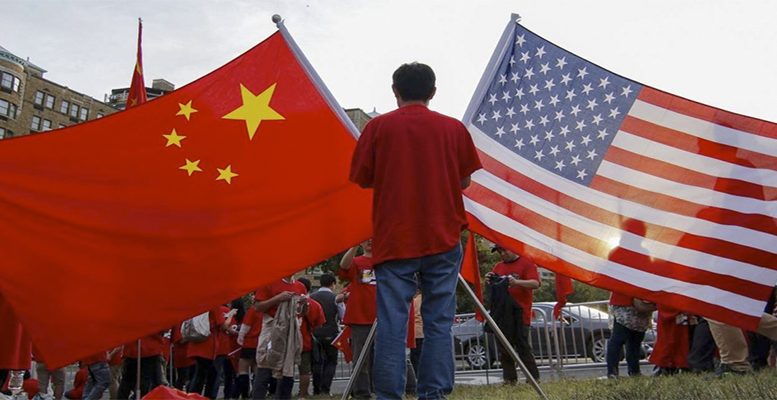 He Fan, Ye Qianlin and Li Chaohui via Caixin | The U.S. president’s three-day state visit to China ended up with dazzling trade deals worth over $250 billion. It seemed the most pressing issue on the agenda would have a respite. We can well recall the bonhomie of the Mar-a-Lago meeting this April, which defused the trade-war bomb between China and the U.S. Later, in August, U.S. President Donald Trump authorized a Section 301 investigation against China, causing ripples of anxiety among the public about trade conflicts again. For all the seeming friendliness, the ballast effect of U.S.-China economic cooperation has diminished, and the relations between the two megapowers of the world are striding into a new era.

The comparison between the Chinese and U.S. economies has not shifted essentially in the past decades, but the second half of the race could only be tighter and tougher. Indeed, not only does China lag behind the U.S. in terms of overall strength, but China also needs to play in a game in which the rules are set by its opponent. On the other hand, China’s economic aggregate advantage has become increasingly prominent, as both China’s total and provincial gross domestic product (GDP) have the strong momentum to overtake the United States. As the gap between the two countries keeps narrowing, the United States can no longer ignore this strong player on the field. Conflicts between the two countries are snowballing, and China’s strategy of “promoting cooperation through economic development” is no longer working.

With transformations of both economies and the adjustment of domestic economic policies, challenges and opportunities will coexist. On the one hand, the space for cooperation in the existing fields continues to shrink, limiting further cooperation and potential benefits. On the other hand, China can explore new impetuses for Sino-U.S. cooperation in other fields such as bilateral investment. In addition, if China and the United States can collaborate on North Korea’s nuclear issue, or if China can win the United States’ support for the “Belt and Road” initiative, it will help improve bilateral relations and lay a solid foundation for China-U.S. economic cooperation. In a word, China must seek new strategies in this new era of Sino-U.S. relations.

The trade imbalance and yuan exchange-rate issue are the most serious problems in the last few decades of Sino-U.S. trade development. Trade friction increased significantly after the 2008 financial crisis due to the rise of trade protectionism. The situation deteriorated as the Trump administration advocated a “U.S. priority” and attempts to bring manufacturing jobs back to the U.S.

There are no quick fixes to U.S. trade deficits with China because they have little to do with currency manipulation but are the result of regional and structural imbalances. First, in the context of the global value chain, the traditional method of measuring trade benefits overstates the trade imbalance between China and the United States. It’s been pointed out that China’s exports to the U.S. are in fact the products produced in East Asia as a whole. Secondly, the root cause of the imbalance lies in the macro imbalances in the two countries. For example, China has a high saving rate and a low consumption rate, while in the U.S., the opposite is true. Thirdly, the United States has also imposed many restrictions on its export of high-tech products to China, and the barriers in service trade where the U.S. advantage is located also led to the continuous expansion of the U.S.-China trade deficits.

The problems mentioned above cannot be resolved overnight through dialogue or by China’s unilateral concessions. In the long run, trade conflicts are very likely to escalate. Although China-U.S. economic and trade cooperation will still play a part in stabilizing their relations, it is more possible that it will become a source of uncertainty.

To face the challenges in trade issues, China should normalize its reaction. First, a warning system should be established for trade friction, keeping a close eye on export products with the biggest shares in the U.S. market or with fast growth rates. Secondly, China should further open up and increase its imports from the world. Its current trade policies also need to be adjusted in order to reduce government interference. Thirdly, in the case of trade conflict, China ought to seek help from the World Trade Organization or other countries to boycott the irregular trade measures adopted by the U.S. In the long run, China should actively promote multilateral trade negotiations and a regional free trade agreement, and engage more in the formulation of international trade rules.

China should seek a new impetus of economic cooperation with the U.S. The State Council of China has already issued “The Circular on Several Measures for Promoting Foreign Investment Growth,” which states that China will further expand the scope of market access to the outside world, further promoting the opening-up of banking, securities and insurance industries. The 19th National Congress of the Communist Party of China also made it clear that market access will be greatly relaxed in order to promote the service industry’s opening-up to the outside world. Continued liberalization of the domestic financial and service markets may be a key opportunity for the success of Sino-U.S. Bilateral Investment Treaty (BIT) negotiations.

The BIT is of great significance to both countries. It will not only benefit China’s national strategy of globalization, but it also represents a great opportunity to promote reform through opening-up. At the same time, the signing of the BIT between China and the United States will facilitate bilateral terms between China and other countries. As for the United States, it hopes to protect the U.S. investment in China, establish appropriate international laws to ensure the implementation of the BIT negotiation results, and help their companies expand market shares in China.

China may first open up nontraditional financial sectors, such as the rating industry, which is still in its infancy. The ratings of many agencies are not well-differentiated in terms of corporate risks, often resulting in large differences in credit risks of enterprises that are supposed to be at the same level. In the meantime, China does not have a normalized rating mechanism, and a rating is provided only when required by enterprises. Moreover, rating agencies are at present managed and supervised by various institutions, which leads to ineffective management of rating agencies and inaccurate risk rating. Opening up the domestic rating market to the U.S. would not only promote competition in the market, but also improve the current rating monitoring system. For the U.S. financial institutions, the Chinese market is huge and in high demand for fair, transparent and effective rating services. Therefore, entering the Chinese market will surely promote the growth of overseas business of the U.S. rating agencies.

In the meantime, China should strive to improve the domestic financial regulatory system and guard against potential financial risks. First, China should seize the window of opportunity of opening up the financial industry to promote fair competition among companies with various types of ownership structures. Second, attention should be paid both to the characteristics of the local financial market and international standards. The introduction of foreign capital will optimize the competitive environment and enhance the marketability and internationalization of Chinese financial institutions. Third, the order of opening-up should be emphasized. Chinese regulators can learn from experiences and reform the regulation system accordingly. Fourth, while opening up financial markets, regulators should attach importance to the monitoring and management of short-term cross-border capital.

Bilateral relations between China and the United States should be pluralistic. More concern should be tilted toward military and security issues rather than simply focusing on seeking economic cooperation. The key to solving trade conflicts no longer lies in trade itself. The Belt and Road initiative and North Korea’s nuclear issue may be the new points of breakthrough.

North Korea’s nuclear program is an imminent threat to both China and the U.S., which are highly consistent in their strategic goal of safeguarding regional security and stability in Northeast Asia. China and the United States should eliminate misjudgment through frank and sincere communication in an attempt to achieve agreement in strategy and action. The U.S.-China collaboration on North Korea’s nuclear issue will become a new foundation of strategic cooperation and lay the groundwork for long-term relations.