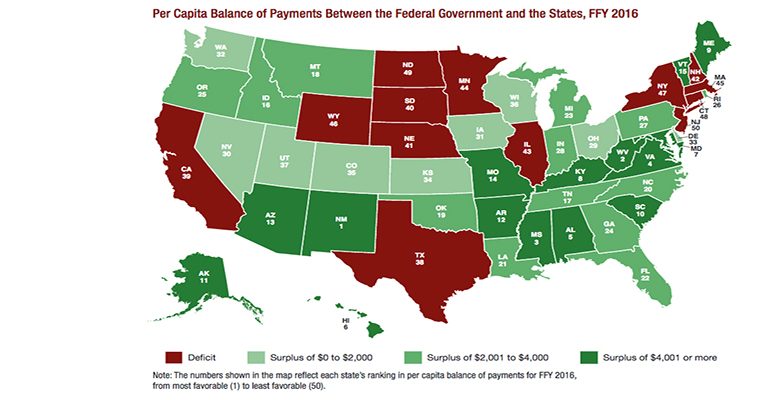 A simple article about the internal balances of payments in the US written by Cullen Roche helps us understand why the Catalan separatists’ famous slogan “Spain is robbing us” is a fallacy. Cullen explains that Florida is a relatively poor state compared with others like, for example, New York. The latter is a net provider of income for the rest of the country and Florida is a net recipient. Florida, in an international trading environment as an independent country, would be bankrupt. It would not be able to maintain parity with the dollar, so it would have to devalue to make what it produces more attractive to those in New York. Thanks to the net flows of income and tax revenues (for the unemployed, for example), Florida is not worried, since it has the spending capacity it needs and, by the way, can spend in NY. Nobody questions the fact that the richest state has a surplus which can give rise to transfers to less wealthy states. They pay more taxes because they are more favoured.

So how does this tacit agreement between New York and Florida work? In the following way: both belong to the same Federal State, the US government. Florida, as the poorer state, receives transfers without compensation (a transfer is identical to no compensation: it’s a donation) without any counter party rights for its citizens, granted by the Federal Government, to certain social payments which try to alleviate the individual differences in income (not regional). The excess taxes which those in NY pay, as well as other states richer than the average, are transferred in part to the jobless, beneficiaries of social security etc in poorer states like Florida.

So Florida receives a surplus to its GDP. This surplus will be spent there and in other states, including NY. Then NY will get back part of what it’s transferred and will also spend in Florida. The advantage is that there are no borders, but a commercial fabric which is so natural and cheap as if it were a market square.

The same is happening in Spain, more noticeable because the taxes are more progressive. But even if the taxes were proportional, the system for transfer balances would function in the same way. But what Catalonia doesn’t understand is that both benefit from this arrangement; both are clients of each other, and if we consider the 50 states, they all benefit from a cheaper and more secure commercial scheme than if they were independent countries.

Catalonia has benefited for centuries from the market of the rest of Spain. And for that reason we would lose everything if secession happens. And even if it didn’t, which I don’t believe, we will lose a lot of time in sorting it out. That said, the only thing Catalan secession supporters want is to save on that transfer which corresponds to them as a wealthier region. If we all did the same, we would lose the advantage of not having borders.

As a matter of act this kind of arrangement would be very good for us in Europe, where we don’t have the possibility of exchange adjustment or tax transfers like in the US. In fact the EU is, up to now, an example of a failed attempt at eliminating borders. But that would require a single tax system which is far from being achieved.