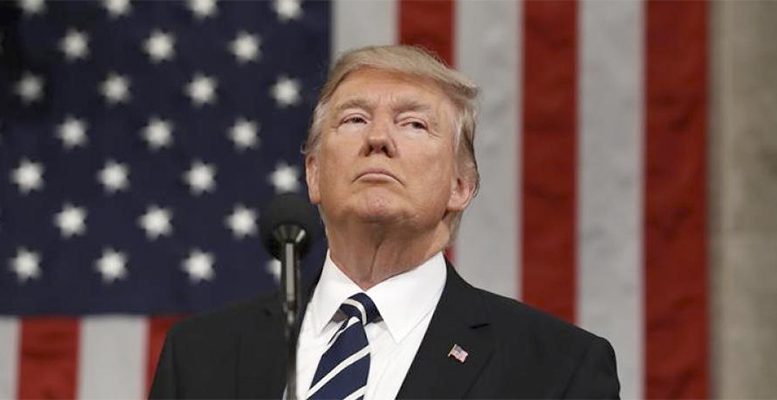 Trump never really threatened a coup, which is a swift and irregular transfer of power from one executive to another

I am “the king of debt”. That was very grandiose for me as a businessman, but it’s bad for the US. I made a fortune with debt, I will sort out the US.

This is the kind of tweet which would ruin anyone’s political career, with the exception of one person: Donald Trump. In fact, when he put it on Twitter on 21 June 2016, he had just won the Republican primaries and had this party’s nomination for the White House in his pocket. This message was, in reality, a typical Trumpian reaction based on the concept You don’t want broth? Here’s ten cups of it.

Barely a month before, the candidate had caused a small earthquake when he declared in various interviews, with his usual bonhomie, that if he got to the White House, the US would restructure its debt. “I am not talking about renegotiation, but you can repurchase (debt) with a discount, and you can do things with the discounts. I would refinance the debt. I believe we should refinance debt on the long-term,” Trump said on May 5 on the financial TV channel CNBC. Five days later, not satisfied with that, he was more explicit with The Wall Street Journal, explaining that “bonds are absolutely sacred. If rates go up. You can buy debt at a discount in the market.”

The fact that the potential president of the country which has the world’s reserve currency was actively considering the possibility of following the economic policy of statesmen with the stature of Cristina Fernández de Kirchner or Yanis Varoufakis caused a certain degree of malaise on Wall Street. As his inner circle well knows, Trump, the self-proclaimed “King of Debt,” cannot read a balance sheet, partly because he is not capable of sitting still for long enough. So the financial sector, with its habitual foresight, gave him the green light.

What’s true is that the King of Debt is now doing what he knows best: get into debt. In this case, not his companies, but the country. The Treasury Department estimates issuing in the current fiscal year 955 billion dollars of debt, 84% more than in 2016, and the highest level since 2011, when the US was still exiting the recession fuelled by the bursting of the property bubble.

The reason is none other than the tax cuts approved by Congress, with Trump’s benediction and the unanimous rejection of the opposition democrats.

Trump’s reaction to the increase in debt has been to ignore it. It’s not just that the president doesn’t even mention the deficits or the debt in his State of the Union Speech. In October, he went on television with an example of creative accounting which Nicolás Maduro would undoubtedly find interesting. “The Stock Market alone has risen 5.2 trillion dollars,” he told his lead interviewer, Sean Hannity, from Fox News. “So to some degree, you can say we are increasing our value and, to some degree, reducing debt,” he concluded. The idea that a country takes on debt using what it’s stock market is worth as collateral is something totally novel which, without any doubt, investors didn’t know about. And when we say investors, we are talking about – resident and non-resident – investors in the country’s stock market, as well as investors – resident and non-resident – in the country’s debt.

What’s certain is that for the moment, US public debt has no effect on the world’s leading economy’s capacity for financing. Fortunately, this makes it unecessary for the Treasury to use, for example, Apple shares as a guarantee for issuing 10-year bonds.

Paradoxically, the self-proclaimed King of Debt has decided to clip the wings of corporate debt via the tax reform. Until December 31, US companies could write off 100% of the interests on debt. From January 1, they can only do this up to 30% of their EBITDA. But there is more fun to come. From 2020, this 30% cap will only apply to EBIT, in other words, it will be much more restrictive.

The fiscal changes have also come at time when official interest rates are rising and the Federal Reserve is also cutting liquidity as it gradually liquidates its assets portfolio. Less profitable debt from a tax point of view and more expensive in the market is an option nobody could expect from the King of Debt.

But the change is profound. It means a new model for financing corporate debt in the US. We recall that Apple has a debt of nearly 100 billion dollars (81 billion euros). This is because the company managed by Tim Cook preferred to take advantage of ultra low interest rates to issue debt to pay dividends and establish treasury stock to placate its shareholders led, precisely, by our friend Donald Trump Carl Icahn. As collateral for this debt, Apple has used the over 252 billion dollars it holds in US banks outside the country, in tax havens, and on which it has not paid any taxes. At the same time, it has used the interests on this debt to be get tax relief in the US.

But Apple’s case is enviable, because the company is only going to pay 38 billion dollars to repatriate these 212 billion. This is a much better figure than the 76 billion it would have had to pay to the tax authorities under the previous tax regulation. Furthermore, if that wasn’t enough, it’s going to be able to distribute the payment of these 38 billion dollars over 8 years.

The problem is a more serious for those companies which have a high level of debt, low margins and don’t have huge liquidity reserves in tax havens. The clearest example of that is Dell, which in its day was as well known as Apple. The computer manufacturer, the biggest in the world in its day, was delisted via an LBO (leveraged buy out) for 67 billion dollars (54 billion euros) just around four years ago. On the one hand, the operation was aimed at freeing the company from the tyranny of having to present quarterly results, something which the founder and top manager, Michael Dell, detests. And on the other, to give him room to adapt his business model in an era when PCs are basically ‘commodities’ and the added value – and margins – are in services and in the cloud.

The problem is that the operation left the new Dell with 47 billion dollars of debt, a huge amount it is struggling to pay and which, above all, is going to play a much less important role in terms of being able to obtain tax relief. For that reason, Dell is studying different “formulas for a stock market listing.”