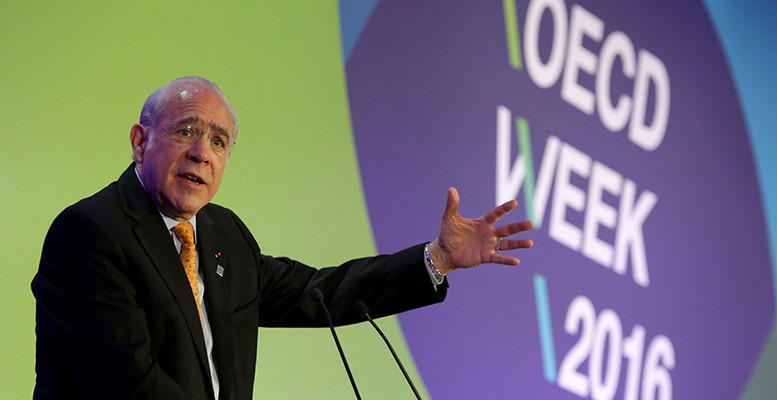 F. Barciela / F.G. Ljubetic | It was well known that the forecasts the OECD were going to present for 2016 and 2017 would be nothing to shout home about. But the figures and the tone of the comments made by Angel Gurria, secretary general of the organisation and Catherine Mann, its chief economist, turned out to be more dismal than expected. In their latest “Economic Outlook” the economists in this club of rich countries, with headquarters in Paris, confirmed that the global economy will continue to grow at a slow speed. But they also said the growth will be even slower than anticipated a few months ago.
In fact they have cut almost all their previous estimates in the case of the EU, the Eurozone, the UK and Japan or Brazil, amongst many others. The global economy will expand barely 3% this year, which means at least five years of weak growth. And things won’t improve much next year with growth forecast at just 3.3%.
Europe will be the worst off, as it is consolidating itself as a region in a situation of what would have been described as endemically slow growth. It has very little, or indeed any chance, of becoming a motor for the world economy in what is left of this year or in 2017. The euro area will grow 1.6% this year and 1.7% next year. And if things aren’t going well in Europe, they are not exactly doing brilliantly either in the US, where the Fed’s rate hikes don’t seem to be helping much. According to the OECD, US GDP will expand by a mere 1.8% this year and by 2.2% in 2017, ratios which the other side of the Atlantic are not used to seeing.
But the difference basically seems to come from the emerging countries, until very recently the drivers of the world economy. They are now squealing and not feeling much like going forward. For example, Brazil will lose 4-3% of its GDP this year and Russia 1.7%.
One of the exceptions in this very bleak panorama is...Spain, yes, which will grow 2.8% this year, even higher than the OECD’s November estimate. Furthermore, employment will rise 2.9%: the second biggest increase of all the 34 countries in the club after Turkey, where it will grow by 3%.
At this point, you don’t need to be a Nobel prize winner to realise that if oil and raw material prices are below minimum – which affects their growth – this has a lot to do with the anaemic economic growth in Europe and the US. And not to mention China, which this year will grow “just” 6.5% (years ago it was growing at 9%) and has cut its imports and investments worldwide. So with the leverage from the emerging markets now exhausted, it seems that the only solution is to do something specific to start the machinery working again.
And this is because, given the deep political uncertainties (amongst them the Brexit issue which will be decided on June 23rd), low consumption and weak growth forecasts, it’s very difficult to expect that a vigorous recovery will now be championed by companies and investors, who are almost on a sit-down strike.
Without actually saying it, Gurria has indicated implicitly that there has to be an end to austerity. And he has asked governments to implement measures to increase aggregate demand. How? According to the club’s secretary general, they can do a lot; it’s in their hands to make decisive decisions about which areas of the economy to invest in, where they can capitalise on innovation and competitiveness over the next 10-20 years: “hard” infrastructures like transport, energy, Internet or telecos, or other “soft” infrastructures like education and R&D.
In addition, as he said, the current low interest rate environment makes it very easy for governments to be a bit more open-handed without risking their deficit or debt reduction targets. Gurria gave China as an example. It has done this (invest and expand) and is beginning, he says, to sort out its problems and once again boost demand and consumption in the country. As a result, it has banished the worst fears which spooked the markets some months ago.
But Gurria and Mann warn that what governments cannot do is to continue to depend just on the actions of central banks. Their capacity for changing reality, and pulling the economy up again is more and more limited. In addition, this will only really happen if countries collaborate, ease up on the “mantra” of adjustments and start investing. At least a little bit. This is nothing new, it’s textbook theory. But it’s good that Gurria is saying it.