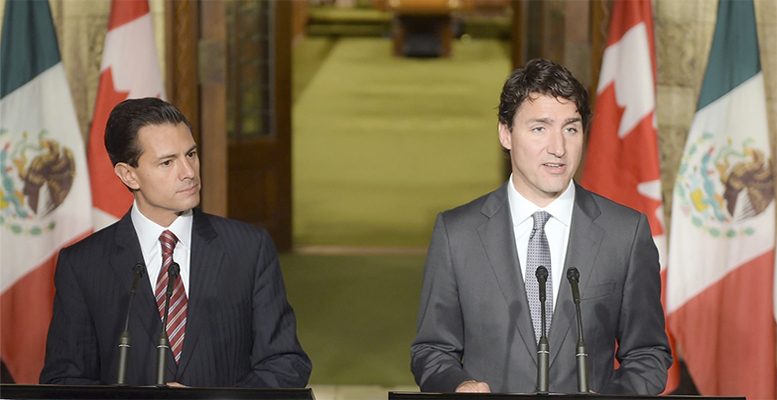 Ivan Farias Pelcastre and Hera Jabeen | Since the start of diplomatic relations in 1944, and until very recently, economic and political links between Canada and Mexico were limited. Their geographic positions have historically (and strongly) shaped their understanding of the significance and the potential of their mutually-beneficial relationship. The two countries perceived themselves as distant from each other, with significantly different societies, cultures and traditions, that merely happened to be pulled together by the economic weight and hegemonic status of their common neighbor, the United States.

For decades, this mutual understanding constrained the breadth, scope and possibilities of a bilateral relationship and a commitment to pursuing and achieving a broader and deeper regional integration process in North America that went beyond the implementation of a handful of trilateral and bilateral agreements. The fragility of the Canada-Mexico link enabled the United States to dominate this process — diplomatically, geopolitically and economically. While the US promoted freer trade exchanges in the region and around the world, both countries willingly accepted this circumstance. Then Donald Trump won the 2016 US presidential election, partly due to the success of his nationalistic, anti-free trade rhetoric. His victory quickly exposed the feebleness of the US-mediated relationship between Canada and Mexico and the fragility of the North American integration process.

As a candidate and then as president, Trump called for an immediate renegotiation of the North American Free Trade Agreement (NAFTA). His well-known intention to pursue an “America First” agenda, which included favorable provisions for the US in its trade with its North American partners, caused an air of uncertainty and put into question the entire purpose and integrity of NAFTA itself. When the US trade representative, Robert Lighthizer, first announced the intention of the Trump administration to renegotiate the agreement and later set the position and objectives of the US in such a process, NAFTA was left in jeopardy.

For both countries, the US is still the most important trading partner in the world. Hence, their economies largely depend on their bilateral trade with their common neighbor. Mexico and Canada were distraught at the possibility of a US withdrawal from NAFTA. In July 2017, they both suddenly found themselves forced into a renegotiation that they had opposed for over a decade.

At the time, the US government seemed willing to abandon the agreement. This was due not just to the chief executive’s convictions, but also to the neglect of the legislative branch toward the proposed negotiations. Their apprehension, however, turned into action. By the end of the year, both governments had launched separate but sustained pressure campaigns to show the US the enormous value of the agreement. At every opportunity, their heads of state and government officials highlighted the benefits of free trade in North America, the nature of NAFTA as a foundation of the region’s economic prosperity and the scale of damage that the Trump-inspired US economic nationalism was already generating in North America and the rest of the world.

Canada filed a case before the World Trade Organization (WTO) against the US for its use of import taxes as a measure for protecting its domestic industries. Meanwhile, senior Mexican government officials, including the chief of international trade of the Ministry of Agriculture, publicly warned that Mexico was willing to leave the negotiating table if the US tried to abandon NAFTA.

The fact that these pressure campaigns were not concerted, however, demonstrates that Canada and Mexico were trying to approach this issue using the very same strategies that landed them in this dilemma in the first place. Officers from the two countries carried out parallel actions and issued statements with similar objectives and messages, aimed almost exclusively at US audiences.

This approach to the renegotiations perpetuated the dual-bilateral nature that has characterized the relations between the North American countries since their onset in the early 1990s, where Canada and Mexico maintain close and strong, yet asymmetrical, diplomatic, political, commercial and socio-cultural relations with their common neighbor, but only limited ones between themselves. Unsurprisingly, this dynamic played well for the US, but poorly served the Canadian and Mexican interests — and only in very specific instances for the latter.

For Better or Worse

For better or worse, until President Barack Obama’s time in office, the US was the pivot of North American relations. As a candidate and then president, Trump put that privileged position into question. Trump’s challenge to NAFTA, nonetheless, had a positive effect: It questioned the dual-bilateral nature of North American integration. Should they have perpetuated this trait, the Mexican and Canadian governments would have failed to devise the benefits of creating a common front for securing and improving NAFTA and would have divided their diplomatic and political efforts. But after decades of inertia, the two countries finally changed their strategy.

On January 2017, Mexican President Enrique Peña Nieto spoke with Canada’s Prime Minister Justin Trudeau ahead of the talks between Mexican, Canadian and US senior government officials on regional security, trade and immigration issues. They agreed to join forces to encourage economic integration in North America. Since then, they have regularly communicated, held meetings and reiterated their conviction and commitment to working together for a NAFTA that will benefit the three countries.

The action and decisions from the Canadian and Mexican heads of state can be regarded as the creation of a united front against Trump’s hardline plans to “Make America Great Again.” It is also, however, a front against Trump’s disregard for the progress and precedents previously made in modernizing and updating NAFTA and its side and parallel agreements. While doing so, the two leaders also acknowledged the need to strengthen their own bilateral relationship and to work more closely on regional and global issues, including the creation of a freer North American and global trade system that does not depend on the status and position of the United States. The announcement of the creation of the Comprehensive and Progressive Treaty of Trans-Pacific Partnership is a first step in that direction.

To effectively progress with the NAFTA renegotiations, Canada or Mexico can recalibrate their trade and make concessions to the US. These measures should not be implemented at the detriment of their economies or societies. The two countries might not have actively pursued the NAFTA renegotiations. They could turn out, nonetheless, to be beneficial for the economies of all the three countries.

Trudeau and Peña Nieto might decide that continuing the NAFTA negotiations is in their countries’ best interests. Yet they should be ready to walk out from them if the US makes unreasonable demands. It is true that without the participation of the US in NAFTA, North America would not exist economically or politically. But it is also true that the rhetoric and the position of the US in the NAFTA renegotiations has already alienated Canada and Mexico from their formerly most important partner. Paradoxically, this hardline stance has already brought Mexico and Canada closer to each other than they had ever been.