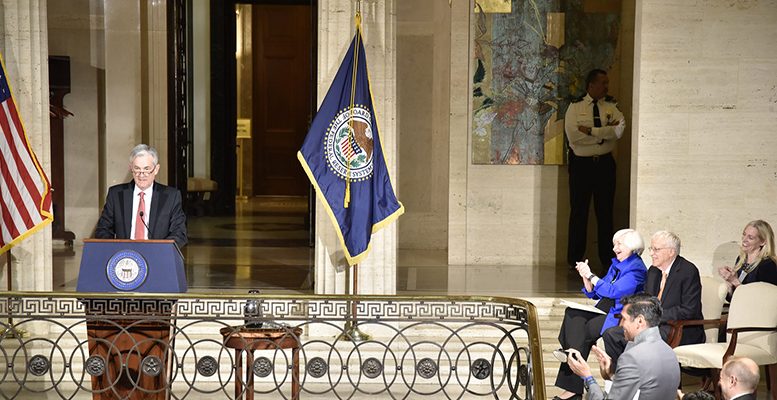 According to the Congress Budget Office (CBO), the 34 day shutdown of the Federal Government has reduced US GDP for 2019 by 0.02%. Specifically, the losses from the administrative paralysation were set at 11 billion$ , although this could be reduced to 3 billion$ in expectation that 8 billion$ will be recovered with the re-opening of the government and public employees receiving their outstanding wages.

Just because of this there are reasons to expect a less positive tone in the US, despite the favourable evolution in the trade negotiations between the US and China or the multiple announcements of economic stimuli in China. For the analysts at Intermoney, the only aspect able to explain this is the so called Powell put. Unfortunately, they add, above all in the markets, its effect will be temporary. But where does this concept come from?

It is not new and comes from Greenspan’s period in charge at the Federal Reserve, when it began to take shape as a reaction to the stock market crash in October 1987. At that point, the Fed more than reversed the September interest rate rise to deal with the earthquake in the markets. Nevertheless, one of the best examples of this concept took shape in 1998 as a response to the collapse of the hedge fund Long Term Capital Management (LTCM).

In just under 4 months this fund lost 4.6 billion $ between the ramifications of the 1997 Asian crisis and the Russian financial crisis, which exploded in August 1998. Two episodes which struck the positions of a highly leveraged fund, given that LTCM counted on a capital of 4.7 billion$ at the beginning of 1998 compared to nearly 125 billion$ in loaned resources, to which were added significant derivative positions off book.

However, according to Intermoney, the importance of the issue lies not in the reasons for or the stages in LTCM’s collapse, but rather the destabilising capacity of this fund, and that it ended up obliging the New York to organise a rescue in September 1998.

The domino effect of a forced and accelerated liquidation of the fund would have been really damaging and this was the main question that they tries to tackle, even if the rescue did not avoid a subsequent return of tensions in the market.

In response to the financial instability, between the end of September and the middle of November, the Federal Reserve cut interest rates on three occasions and they fell from 5.5% to 4.75%. The Greenspan put was again a reality, explained by events in the markets, given that in that period GDP grew quarterly 6.6% yoy in Q498 and 3.3% in Q199, at the same time as the unemployment rate followed a clear downward trend (4.3% in March 1999). However, it must be recognised that the inflation figures, with Personal Consumption Expenditures below 1.5% yoy, did not oppose the steps taken.

The important interrelationship between the real and financial economies mean that central banks cannot live with their backs to what is happening in the markets. The valuation of financial assets undoubtedly impact on the wealth effect and more in countries like the US where households and markets are more exposed to them.

The situation describes is well known by investors in the US, although for them what is really important is to know where is the put of the new Fed chairmen. In other words, to what extent are they willing to see markets fall before intervening with measures which alleviate or correct the situation. This is what the Fed chairmen´s put means and what gives meaning to the analogy which is made with the sale of a put option.

In relation to this concept, it is curious that different circles target a stock market deterioration of 20% for the Federal Reserve to begin to cede, given that on this occasion the fall in the S6P 500 from its highs of September to the lows of December is about this figure. However, it is true that Powell began launching softer messages before it reached this level, sketching out a clear change in the exit strategy and letting markets price in a slowdown in interest rate rises after the increase to 2.25-2.5% in December.

However, it was not until after the S&P 500´s lows in December that the hardliners on the Fed began to give ground in their statements, a situation which became general with the new year and, especially, when US markets fell in the second session of the year with a return of instability. In fact, this caused Powell to redouble his commitment and point directly at the balance sheet with an eye on financial stability.

In this new Federal Reserve stage, in contrast to the past, the Fed put is activated not with interest rate cuts, but rather with a slowdown in rises and the possibility of a reduction in the rhythm of balance sheet. A line of action which is no small matter when we are confronting an economy which is growing above its potential, at the same time as inflation (based central PCE) is converging with Fed targets and unemployment is 0.6% below its long term level. In fact, the risks centre on rising wages in the US, increasing at annual rhythm of 3.2% in December.

Days later, the Beige Book made two relevant points which had passed unnoticed. Firstly, the competition between companies to find workers (with any level of qualification” and, secondly, that “wages increase across the levels of qualification, above all entry salaries as companies seek to attract and retain workers and the new minimum wage laws enter into effect”.