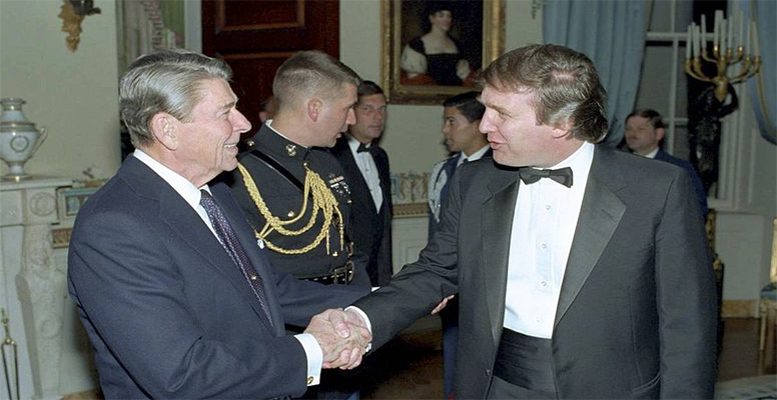 Reagan is a precedent for Trump as Krugman says. We can envisage what Trump’s early years will be like thanks to Reagan. He was a liberaliser and anti-deficit, but the fact is that he practised the opposite to what he preached. He bumped up the public deficit and debt to a high level through his policy for increasing military spending and his reform to lower taxes. We can see in the first graphic how the debt/GDP ratio took off in the Reagan years.

In the following graphic, we can see that this had a series of effects which can easily be reproduced under Trump: Reagan’s mandates were characterised by a high fiscal déficit (blue line), which increased domestic demand and caused GDP to grow strongly (black line).

This strong internal growth relaunched the external deficit, which was also strengthened by the sharp appreciation of the dollar (green dotted line), fuelled by capital inflows. At that time, they talked about the twin deficits due to the size of the fiscal and external deficits. Real GDP growth rose to 7.5% in 1983.

Meanwhile, other advanced countries were languishing. So in 1985, the Plaza Accord was drawn up under the terms of which the G-7 countries implemented a series of internal and external measures to curb the dollar’s rise (in the graphic you can see the sudden fall in the dollar at that time). In 1987, two years later, the devaluation of the dollar  seemed excessive to those countries. So they established a new accord, the Louvre Agreement, and decided to reverse the exchange rate policy of the central banks to stop the dollar’s decline. However, as you can see, the dollar continued to fall until the beginning of 1988 and remained at a low level until 1991. What should be pointed out here is that Trump’s policy of increasing the fiscal deficit (he has announced 1 billion dollars of investment in infrastructure) and cutting corporation taxes, will boost domestic demand, which will boost GDP growth. And this will inexorably increase the demand for imports, and, thus, the external deficit. So will be in a situation like the one with Reagan? As far as the twin deficits is concerned, it’s more than likely.

But the thing is that Trump’s promises contain another element, protectionism, which could put the brakes on the external deficit to some, or to a large, extent, as well as bring money in for the public coffers, due to the rise in import tariffs. In any event, this would not happen immediately. What we will definitely see is a huge rise in the dollar, as a result of capital inflows which will boost growth, increasing companies’ profitability. Will the nationalist Trump allow non-US capitalists to take over domestic companies? In any case, note that his intention of penalising US companies which invest abroad strengthens the argument of huge capital inflows and the dollar’s revaluation.

What happens later depends on the reaction of the actors involved to these likely factors. Trump has been impulsive up to now and has been very quick to sign any piece of paper which causes problems for others, like the wall with Mexico, which he has said will be financed by the levy on that country’s imports. Mexico will have all the right in the world to react in one way or another.

We don’t know how he will react to the dollar’s rise, the increase in the deficit, etc, but it will more than likely be in an arbitrary fashion, without negotiating, and with results which may be a boomerang for his own country. In addition, there are things which have got worse since the 1980s, like the level of debt, now estimated at 110% of GDP. This debt will rise out of necessity to finance the increase in the deficit.

So another reason for revaluating the dollar, because this financing is inflow of capital.