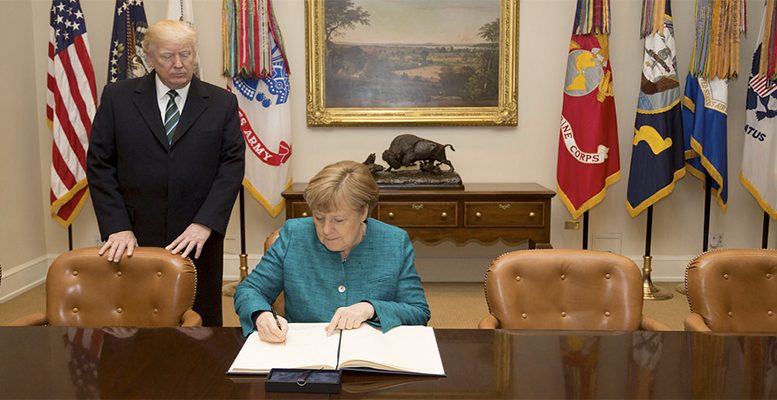 Donald Trump and Angela Merkel at the White House

*This post was originally published in Sparse thoughts of a gloomy European Economist.
Francesco Saraceno | Readers of this blog know that I share with Donald Trump the belief that Germany is harming the world economy. (Ok, ok, it is not bad Germany, it is bad German trade. ). Yet, I think it is worth pointing out something trivial that is not emphasized enough. Trump is right about Germany, but for the wrong reasons. The problem is not the number of German cars circulating in the US, but the number of American cars not circulating in Germany.

The trade balance is a subtraction, exports minus imports. Thus, it can be small when a country does not trade a lot (small exports are similar in size to small imports), but also when the country trades a lot (large exports are similar in size to large imports, the difference being small). The size of the trade balance has all to do with the relative size of imports and exports, and very little to do with the openness of the economy.

Trivial, isn’t it?  And yet, Trump, and many (way too many) commentators forget it when they argue that we should stop seeing many German cars circulating in the US. Protectionism is just one of the possible solutions to widening trade imbalances. As it does not directly address the excess savings (or spending) in countries in disequilibrium, its effectiveness can be questioned (and the jury is still out on this). Among other things because protectionism is a declaration of war, and likely to trigger a race to the bottom.

A more direct, and certainly effective way to reduce imbalances is to reduce the excess surplus (deficit) of domestic demand on GDP in deficit (surplus) countries. This is where more American cars in Germany would help. I don’t think that I am saying anything new here…

I know the answer to this. “How can you force Germany to rebalance its economy, and spend more?”  “That will never happen.” “Germany only cares about its interests”. I have heard all of these. I am conscious that the problem is not economic, but political. But the political difficulties of this (too long) moment, and the stubbornness of the German elites don’t make protectionism less problematic.

Norms exist in Europe, requiring external rebalancing. And Germany has been breaching them since the crisis started. It exists a narrow path to building a “coalition of the willing” among European countries, to force Germany to tackle its imbalances. Difficult? Certainly. Unlikely? Maybe. Costly? Probably. But still less than  embarking the world economy into a trade war, and/or dissolving the euro.