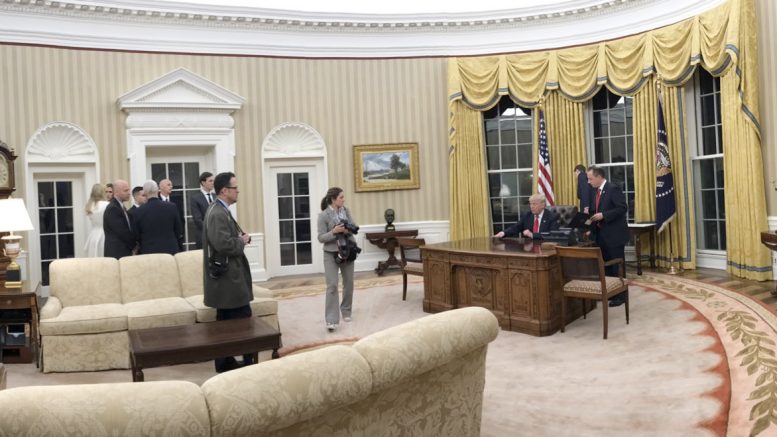 After two days in Washington DC meeting with politicians and policymakers, BoAML analysts conclude that energy “is a policy cornerstone, together with tax reform, in this Administration”. As they explain:

The approval of both Keystone and Dakota Access pipelines was just a warm up. A lot more is coming. An “all of the above” approach to energy that shies away from regulation and from picking winners is shaping up. Trump is set to prioritize economic growth and job creation over all other policies, particularly climate change.

Energy independence is also a national security priority. For the energy sector, this means more access to Federal land and water resources and less regulation. It means a faster build out of infrastructure. In particular, BoAML point that:

Energy is a key focus because it creates jobs in red states and can respond to policy on time for next year’s mid-term election.

Energy should be a winner in trade too. The President just announced the US will not withdraw from NAFTA for now. Mexico is America’s largest buyer of natural gas and gasoline. America is Canada’s largest buyer of crude oil. Power flows freely across the borders. Regionally, North America is almost energy independent, reducing reliance on hostile powers. Considering those arguments experts believe that importantly, two elements of NAFTA’s renegotiation could boost both energy supply and demand in North America.

On the one hand, tighter content rules in tax-free exports to the US could lead to more Mexican industrial activity and more US natural gas demand in Mexico. On the other, Mexico’s energy reform presents a tremendous opportunity for US energy, technology, and infrastructure companies. So NAFTA stays and the world’s largest energy compact emerges from it, in our view.

Geopolitics will likely get more complicated with Iran

Trump’s foreign policy priorities are just starting to shape up. But recent decisions to not grant a waiver to Exxon for Arctic drilling in Russia and to bomb Syria’s military in response to the use of chemical weapons are consequential for energy markets in  BoAML’s view.

America’s approach to NATO or even Russia is unlikely to change much after all. Reducing Russia’s oil and gas revenues by maintaining a large export presence in global energy markets remains a key foreign policy objective. Yet, the Republican Congress still does not like the Iran nuclear deal and Trump has threatened to scrap it. With Iran vying for influence in the region and domestic elections coming up, policy changes could lead to a renewed set of sanctions. Iranian crude oil output could drop again.

America likely stays in Paris, but on Trump’s terms

Finally, keeping Russia in check and reducing CO2 can be compatible objectives, so Obama’s doctrine on LNG exports remains in place. Europe wants American gas, and so does Asia. Republicans have realized that the Paris Accord can be a foreign policy conduit. True, Trump will not be using climate change as a policy filter. But if the US can export more LNG and clean technology to the world, curbing global CO2 emissions can create rather than destroy jobs in America. After all, US carbon emissions fell naturally in recent years on coal-to-gas switching and increased use of renewables. Paris provides a framework to extend US dominance in global energy markets, but Trump will likely change the terms of the accord.

As analysts concluded in February (see A New Deal for American energy), Trump’s laissez-faire approach to energy only faces one obstacle: low prices.