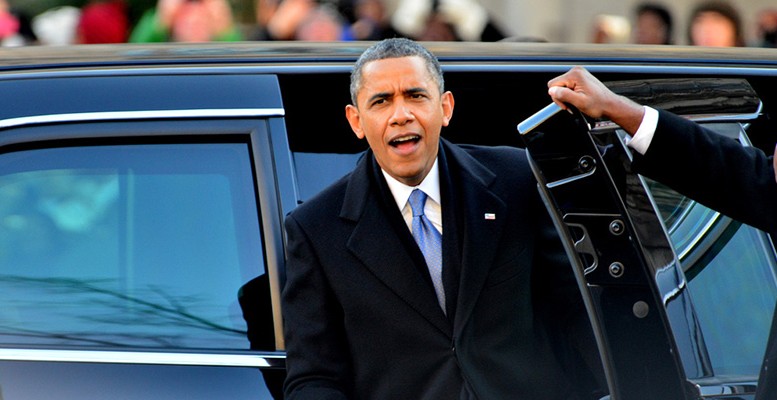 Veena Trehan | Obama’s legacy will be scarred if he deviates from focusing on addressing climate change. In August 2015, US President Barack Obama made a memorable trip to the Arctic just months after approving Shell’s drilling off the coast of Alaska. At the time, he said: “Climate change is no longer some far-off problem; it is happening here, it is happening now.”

These words were echoed on February 28 by Leonardo DiCaprio in his acceptance speech for Best Actor at the Oscars. The Revenant winner added: “We need to support leaders around the world who do not speak for the big polluters or the big corporations, but who speak for all of humanity … and for those people out there whose voices have been drowned out by the politics of greed.”

Obama’s record has been as contradictory as his Arctic actions and corporate funding would imply. Progress has been made on what has been described as the only issue that will matter in 100—and 10,000—years. Renewables have become the largest new source of electricity after federal tax credits were passed, state targets adopted and costs decreased. The president had embraced an all-of-the-above climate change strategy, including “clean coal.”

The president has made progress on international issues, too. He rejected the controversial Keystone XL pipeline ahead of the climate talks in Paris, and then advanced a global accord of voluntary, nonbinding commitments. If met, those commitments should limit warming to 2.7-3.5 degree Celsius versus longstanding, reaffirmed targets of 1.5-2 degrees.

The US president understands climate action will be a crucial part of his legacy. As climate change devastates humanity by transforming agriculture, hunger, war zones and clean water supplies, all possible policies should be marshalled to limit it.

Yet climate protections are being undermined in trade agreements. They support unlimited monetary compensation for companies affected by governmental climate action, even as enforceable carbon targets are blocked in global climate talks. It’s puzzling.

The Trans-Pacific Partnership (TPP), which fails to mention climate change in its 5,000-page text, provides an example. Signed on February 4 with a two-year period for ratification, the TPP includes 40% of the world’s economy. It allows for investor-state dispute settlements to address multinational corporations’ claims that government regulations to prevent climate change will reduce future profits. Banks and corporations could use arbitration panels, often manned by those with corporate interests, to get billions from governments who act to protect their citizens. A new study shows that such panels make decisions that favor the ultra-wealthy and powerful corporations.

Other trade deals with provisions similar to the TPP’s are already undermining climate action. TransCanada is suing the US for $15 billion under NAFTA investment provisions like those in the TPP. This comes after President Obama rejected the Keystone XL Pipeline, following the largest American environmental protests in decades, and wake up calls from climate experts. Also, on February 24, the World Trade Organization ruled against “buy local” provisions of Indian law, which helped develop India’s fast-growing solar sector. Similar provisions are being used in almost half of American states to grow renewable energy.

So, are the TPP’s economic benefits a blessing?

Actually, several studies found this corporate wish list will produce minimal or negative growth, job losses and greater inequality. These impacts should alarm politicians. But while both Bernie Sanders and Hillary Clinton oppose the TPP, her opposition has been limited and contradicted by US Chamber of Commerce President Tom Donahue, who says he expects her to support it.

Finally, President Obama signed the Customs Bill on February 25, which contains a negotiating objective to keep the United States Trade Representative from addressing climate change in trade agreements using the fast track process. Why would we kneecap ourselves from addressing our top priority, discouraging greater tariffs or monetary damages for stupid climate actions?

It’s hard to believe that Obama’s warning in Alaska that climate change could “condemn our children to a planet beyond their capacity to repair” has driven his decision-making. Yet as a current world leader and a future ex-president, he can still make a tremendous impact.

Putting the planet first, President Obama should call for creating the necessary and viable renewable energy future. He should discuss how we must keep most fossil fuels buried. He must call out the companies undermining our climate security through trade and politics, and speak to the fact that trade deals may lock in unprecedented devastation. His legacy and our world will be scarred, should he deviate from focusing on our people and planet.