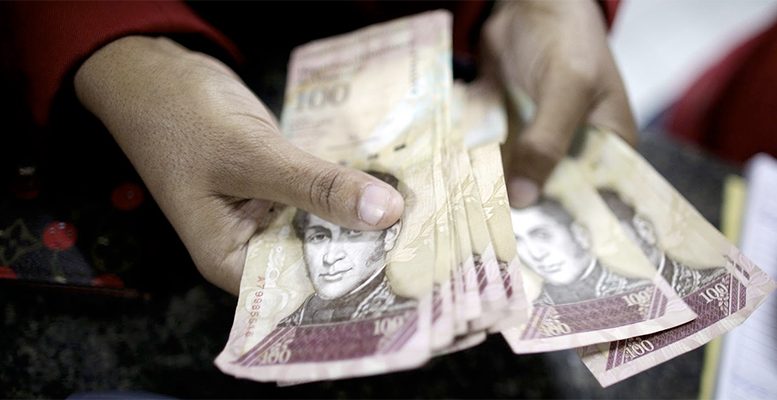 The height of the paradox, or the oxymoron, is that Venezuela has such high inflation that bank notes have become one of the most sought after ítems!

In Venezuela there is an incalculable inflation and nobody really knows what it is. It’s estimated at 10.000% a year, 87% a month…who knows. That inflation is principally in the minds of the Venezuelans, because there is a lack of any essential product. Shelves are empty and whatsmore, they make a fuss if you don’t pay in cash.

But why is that, if the first thing the books say about these kinds of cases is that the citizen rejects the official bank note and replaces it with any other thing which functions more like money, namely a means of exchange, an accounting unit, a deposit of value? It might be that there is such a lack of products that nothing is good enough as a substitute for money. It seems that the Central Bank is so inefficient that it is producing bank notes, which are increasingly more necessary given the constant rise in prices, at half throttle, and is having problems paying for the basic materials to make them. In short, the supply of notes is scarce…in relation to the demand.

Inflation is running ahead of the production of bank notes, at least of those with a higher denomination. This makes them more sought after! On the other hand, nobody wants small demonination bank notes.

Added to this is the fact that Maduro has decided to round up the value of the bank notes, knocking off zeros. From an 80.000 bolívar note, equivalent to a dozen eggs, three zeros are going to be taken off, so it will become an 80 bolívar note. Of course this is totally useless, but whatsmore it’s all so badly done that the old notes are removed before the new ones are available.

According to the correspondent, there are places where there are supplies if you have big notes. Little markets in far-off places, where they have flour, cereals and they want to exchange that for…notes. Forget about it if you have a credit card. What do they do with these notes which the next day are nominally worth less? It’s a mystery. Buy something which will last for a long time, I suppose. But Maduro’s ire has led to there being hyperinflation, while at the same time bank notes are scarce and in demand.

It’s true that these notes would be worth less if the Central Bank’s supply increased at the same rate as inflation, but they are incapable of doing that. So why does inflation not decline? Isn’t it liquidity and how fast it rises which is the cause of inflation? Ah well…

Hyperinflation is not just in the increase in the bank notes, but also in the scarce supply of products. If they charge you thousands of bolívars for eggs, but the notes you have aren’t enough…you don’t get the eggs. I repeat: I would wait until, if that happens a lot, the price of the eggs declines, but it’s not like that. The only thing I know is that there is no supply…not even of certain notes.

To sum up, it seems that there are two kinds of bank notes, and some of those of a higher denomination are still considered as money. This is not the first time  this distinction has been made. I think the same happened in Zimbabwe, or Uganda. People were looking for old notes, of which there was a fixed supply, to exchange for new ones. It’s all about the different rate at which things are devalued, including some bank notes.