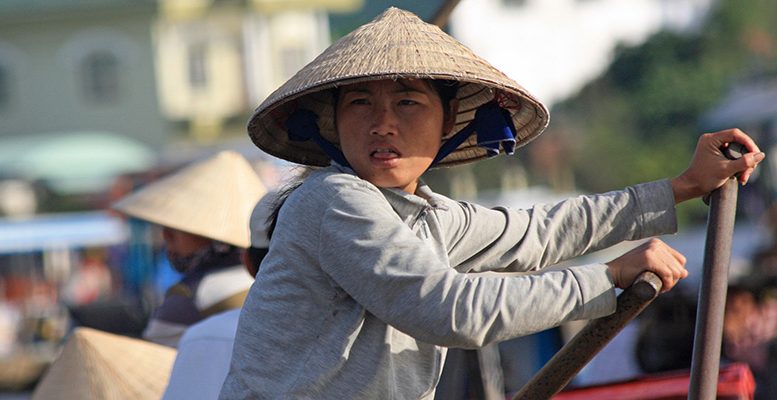 Cai Rang floating market, near Can Tho (Vietnam)

In the mind of many investors, frontier markets are a black box of uncertainty, characterised by unstable leadership, volatile currency, and questionable corporate governance. However, broad investor aversion has created some of the most compelling bottom-up investment opportunities of any asset class. Charles Sunnucks, Assistant Fund Manager, Jupiter Global EM, explains that Vietnam and Cambodia, for example, are frontier economies that, “for most of the past 50 years, have been largely isolated from foreign investment and trade, stunting their development relative to regional peers.” Both countries are however reforming, creating substantial opportunity for those businesses able to adapt and profit from change.

“While Vietnam still retains its one party communist political structure, it is fast shrugging off the state directed economy,” says the analyst Charles Sunnucks. In fact, trade and investment are succeeding where a costly US led invasion failed. There is now a thick IPO pipeline of state companies keen to attract foreign capital, and of those listed some are eagerly lobbying ministries for greater autonomy. Historically, foreign participation in the equity market has been limited by caps controlling overseas ownership. Policy makers are, however, gradually increasing foreign ownership boundaries, and in some companies have already eliminated restrictions altogether. As market accessibility improves, so does Vietnam’s chance of shifting from a ‘frontier market’ classification to ‘emerging market’, a transition which should over time support lower financing costs for corporates and is already overdue in terms of economic progress.

Banks – returns and risk both building

Vietnam’s ascent has not been smooth over the past decade. Affected by the 2008 global financial crisis, the country also endured an even deeper credit cycle in 2012 owing to excessive state borrowing. Due to regulation limiting annual recognition of bad loans – an unfortunate remnant of state control in the banking system – the profitability of many of Vietnam’s banks has only recently started to really recover. Indeed the current environment of more controlled inflation and accelerating credit growth, at a time of improving returns, has supported a significant rally in the sector. However, according to Jupiter Global EM,  while there are some positive structural changes – namely improved regulation and a shift away from excessive lending to state owned enterprises – there continue to be some concerning lending practices, and if credit growth is to be sustained, considerable capital needs to be raised by most banks. Moreover, while consumer borrowing may be off a low base, the recent pace of growth and limited consumer credit bureau coverage suggest that new asset quality challenges may already be in the making.

The opportunity to profit from Vietnams’ rise is not limited simply to the country itself. Indeed, many regional companies are increasingly shifting manufacturing or selling within Vietnam. In the most recent World Bank’s Ease of Doing Business rank, Vietnam rose 14 places to 68th out of 190 economies, and the country’s leadership aims to make Vietnam one of the top four investor friendly economies in Southeast Asia. For Jupiter Global EM this, coupled with the fact that Vietnamese wages are still as little as a third of those in Chinese coastal cities, “makes it a very attractive destination for fixed investment.”

One of the more contentious consequences of increased trade, however, has been the extent of Chinese investment; especially at a time of poor relations over competing maritime border claims. When it comes to China’s ‘one belt one road’ initiative to promote overseas trade, the belief in Vietnam is: if you don’t accept the “road”, you get the “belt”.

Cambodia is different. The country has fully embraced Chinese investment, not least because unlike some western capital it comes with no democratic reform strings attached. Despite poor infrastructure and a lowly skilled labour force, the country has been a very competitive destination for low end textile jobs due to its young, and therefore low cost, workforce.

The country’s demographic advantage is largely due to the genocide of the 1970’s under the rule of the Khmer Rouge, a horrific four year period when roughly one-fifth of the population was killed, leaving 65% of the country’s population today below 30 years old.

Outside of Cambodia’s recent past however, the country has a rich history with three world heritage sites, making it a popular tourist destination. In 2016 it was estimated that the total contribution of travel & tourism to GDP was nearly 30%, and it accounted for around one quarter of jobs. Promoting further growth in tourism is a key part of the country’s development agenda. In particular, attracting more visitors from China, a country which already accounts for roughly one fifth of total tourists and where visitor numbers are projected to double by 2020 due to new flight routes. While there is a very limited universe of listed equity, and even less choice in terms of attractive investment opportunity, investors can gain exposure to improving tourism, albeit through companies listed on overseas exchanges.

In conclusion, across both Cambodia and Vietnam there is a diverse range of risks and opportunities. As the team of Jupiter Global EM points:

Differentiating between growth due to a cyclical tailwind rather than underlying structural change will continue to be a key factor in assessing the quality of progress and avoiding bubbles.

While the transition of these economies may not be positive for all companies, those with robust business models and positioned to profit from structural change can experience a growth opportunity on a scale well beyond most emerging and developed markets.