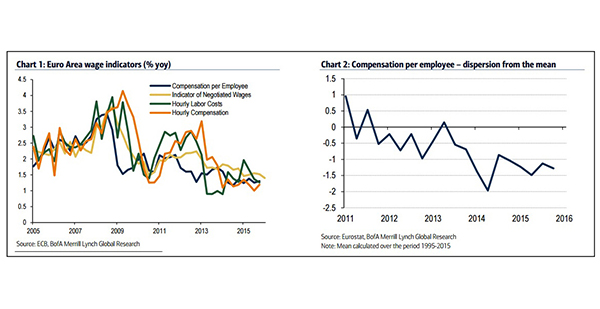 BoAML | We have remained quite bearish on Euro area inflation for the past few years, particularly compared with ECB forecasts (but also consensus), and have highlighted the many downside risks to the inflation outlook. We look for evidence of second-round effects driving the recent weakness in wage growth. Our empirical exercise shows that the current period of persistently low inflation is indeed having a significant (and still increasing) negative impact on wage evolution, including in countries with very low unemployment like Germany. It may be too early to claim that second round effects are strong and persistent, but wage dynamics clearly warrant vigilance, as the ECB has highlighted.

How much of the weakness in wages is driven by weakness in inflation?
We start by replicating the ECB exercise. This has two steps. First, we run a standard Phillips curve model where compensation per employee is regressed against its own lag, lagged inflation, productivity per employee, the lagged unemployment rate and a constant. Then we estimate the contribution of each of the explanatory variables to deviations from mean historical growth compensation per employee following Yellen, J.L. (20152 ). It is important to point out that the contribution of each component should be interpreted as being expressed in relative terms to the historical average contribution.

Compensation per employee has been underperforming the historical average growth (a negative value means wage growth is below the historical mean). Which factors are responsible for this pattern?  A decomposition of the contribution of each one. The results are not too different (although not identical) from those of the ECB:
1. Unemployment has been the main driver of the weakness in wages, although this is starting to fade as slack keeps reducing.
2. Weak productivity growth is certainly having a negative impact on wages.
3. The period of persistently low inflation is also having a significant (and still increasing) negative impact on wage evolution. This by itself suggests that second- round effects could be present.

A historical perspective is useful here. Two things stand out. First, there have been only rare occasions on which lagged inflation has had a significant impact that deviated from historical standards. This makes current developments a “rare event”.
Second, periods when inflation contribution to the evolution of wages deviated significantly from the norm in either direction tend to coincide with periods of large movements in oil prices. This, again, fits well with ECB concerns that the large move in oil prices could end up feeding into core inflation through second-round effects and their impact on wages.
Still, one could argue that recent developments represent just a shift in the structural relationships we are looking at, perhaps driven by recent labor market reforms across certain countries. To look a bit more carefully at this we replicate the same exercise for the four largest economies in the Euro Area: Germany, France, Italy and Spain.
If the relative importance of each factor has changed recently because of labor market reforms, we should see a differential pattern across these countries.

The first quick conclusion is that the period of persistently low inflation is having a significant negative impact on wage evolution in all countries, although the quantitative importance of this differs across them.
In fact, the smaller impact is found in Spain, the country where labor market reform took place earlier (this does not mean that wages in Spain are not affected by inflation; it means that the relationship has changed less than in the other countries). In Germany, a country without labor market reform during the 2011-2015 period, the impact of lagged inflation on wages is sizeable, although a historically tight labor market has compensated for that, helping to deliver wage growth above historical standards. In Italy, where labor market reform took place at the later end of the sample, the period of unusually low inflation is the main contributor to the very weak evolution of wages. Finally, in France inflation is still dragging wages down, but this is small compared with the impact of the still-high unemployment rate.