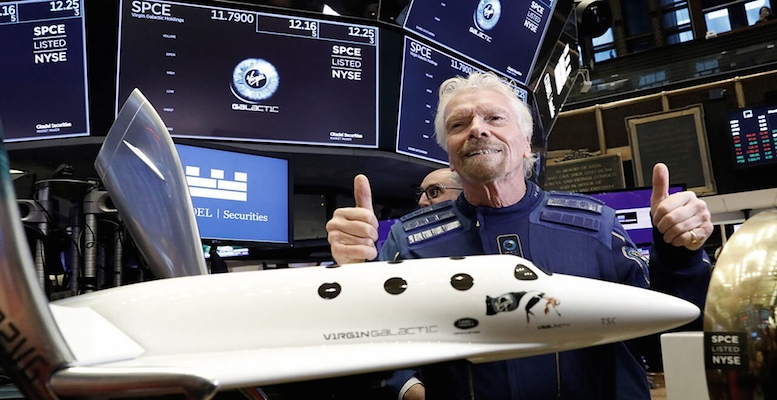 Louis Brennan via The Conversation | With British billionaire Sir Richard Branson’s successful flight to the edge of space, he and his company Virgin Galactic have firmly established themselves in the history books as space tourism pioneers.

While not the first tourist to enter space, 70-year-old Branson is the first to make his journey with a commercial spaceflight company, marking a giant leap for the space tourism industry being championed by some of the world’s most famous billionaires.

Unlike its rivals, Virgin Galactic launched its spacecraft from a carrier craft – not from the ground. Branson and three Virgin Galactic mission specialists travelled along with two pilots in the company’s SpaceShipTwo craft “VSS Unity”, which was carried by a WhiteKnightTwo aircraft to an altitude of 50,000 feet before being launched from the carrier craft. The mothership aircraft, named VMS EVE (after Branson’s late mother), launched the afternoon of July 11, after a short weather-related delay.

VSS Unity then ignited its own rocket, taking it to a height of over 50 miles above Earth. The four passengers experienced weightlessness and observed the curvature of the planet’s surface before reentering the earth’s atmosphere and landing at the company’s spaceport America base in New Mexico.

While SpaceShipTwo did not reach the Kármán line – 62 miles altitude above Earth and often regarded of as the edge of outer space – the Federal Aviation Administration puts the dividing line lower, at 50 miles.

Virgin Galactic’s success has not been an overnight one. Founded in 2004 to provide paying customers a trip into suborbital space, the company has experienced many false dawns over the years with projected dates of flights proving overly optimistic and a major setback involving a fatal accident in 2014.

The company has made substantial progress in recent years, achieving its first suborbital flight in December 2018. Virgin Galactic became the first commercial spaceflight company to list on the stock market in October 2019. While the stock has been volatile in the meantime, it has rallied by around 50% since securing approval from the US Federal Aviation Authority last month to proceed with passenger flights.

With an eye on the history books, Virgin Galactic immediately announced plans to advance Branson’s spaceflight aboard SpaceShipTwo to July 11, upstaging by nine days his rival billionaire Jeff Bezos’ planned trip into space.

Virgin Galactic plans to start commercial space tourism flights early next year. This is welcome news for the 600 aspiring space tourists who have waited years since making their reservations at a reported price of $250,000 in the late noughties. The company has plans to produce dozens of spacecraft in anticipation of increased passenger demand.

In winning the first round of the space tourism race, Branson has – for now – eclipsed his fellow billionaires, Amazon founder Jeff Bezos and SpaceX and Tesla’s Elon Musk, and has scored a major marketing coup. However, both Bezos and Musk have ambitious plans for space tourism, extending in the case of the latter to the moon and even Mars.

Bezos himself is due to launch into space on July 20 – 52 years since the first moon landing – aboard his company Blue Origin’s New Shepard rocket. Bezos will be accompanied by his brother Mark Bezos, American aviator Wally Funk who was part of jettisoned programme to send women into space in the 1960s, and a fourth passenger who won the auction for the remaining seat with a winning bid of US$28 million (£20.1 million).

Beyond these initial flights with their billionaire founders aboard, Virgin Galactic and Blue Origin will be competing to take paying customers on suborbital flights.

The two companies will also derive revenue from taking science experiments and researchers into space. This will be far less expensive than the more elaborate task of sending experiments and people to the International Space Station. Later this year, Musk’s SpaceX plans to send four passengers on a three-day orbit around the earth, circling it in a Crew Dragon capsule at an altitude of 335 miles.

With the takeoff of space tourism and more generally the business of space, Bezos, Branson and Musk can no longer be dismissed as wealthy boys with toys. They have brought a renewed pioneering spirit and entrepreneurial zeal and intensity to the space sector. In doing so, they have made substantial progress in advancing the frontier of space and space tourism.

They have created cost economies through, for example, their innovative implementation of circular economy principles. For example, SpaceX’s embrace of reusable rockets has drastically reduced costs.

Critically, these flights have been an inspiration to others. Private capital is now flowing into the space sector with its size forecast to increase almost threefold by 2040 to become a US$1 trillion industry (£719 billion).

While the first round of the new space race may have a winner, there are many more rounds to be completed. Given the high risk nature of space travel and space more generally, there will be setbacks as well as successes. Still, while the stakes may be high, the potential rewards are great. Branson’s successful journey marks an important moment in the commercialisation of space.