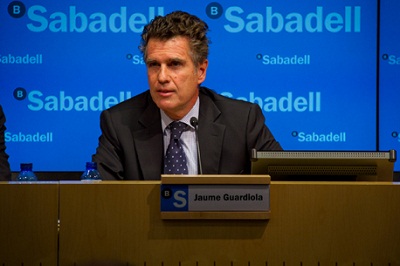 MADRID | In a interview published by El País this weekend, Jaume Guardiola, Banco Sabadell’s CEO (which is the fifth Spanish bank in terms of assets) said he was very optimistic about the country’s financial system and its economy as a whole. Despite the crisis that besieges Spain’s banking sector, he noted the industry will become smaller and more professional. He also thinks that the Spanish economy is showing “unequivocal” signs of competitiveness improvement. About the European construction , the executive believes it is on its way. This is an extract.

It must be difficult to take decisions in this moment. This crisis is marked by the fact that many financial entities in trouble had been distracted or paid more attention to thinking about what they lost than to doing their work. I led the BBVA’s operations in Argentina during the “corralito”. Something we should know is that everybody is in the same situation, and even though with limitations, competition exists. Those who work hard, with dedication and willingness, will get a better relative position.

You mention the “corralito”. Do you think are there some similarities in Spain? To extrapolate the corralito to Spain’s reality within Europe is a very difficult tightrope walker exercise. Neither the soundness nor the foundations of the Spanish economy have anything to do with what happened in Argentina.

Capital outflows are registering record high levels. I think it is a momentary event, although it reflects investors confidence deterioration in our country. It should be interpreted wisely in order to put it into context within the current European instability. We should not forget that we belong to the euro zone, which acts as a safeguard from a currency crisis point of view, in the sense that the necessary financing will be covered in the end with the access to the Eu

The Spain’s risk premium has spiked, and Brussels is sending contradictory messages. What is the option that the Spanish banking sector should take? Europe has a very complex governance. The decision-making grounds on some specific agreements make the process very slow. We have never seen politicians spending such a great deal of time together, and this is what building up the European Union involves.

The Spanish financial system is under a very profound change. In the end, we will have a financial system much smaller in terms of players, but much more orthodox because they will be listed on the stock exchange, with shareholders, and consequently, more professional. However, there is no easy way, and it is difficult to carry out the necessary transformations when the economic environment is tough. The Spanish economy is showing unequivocal signs of competitiveness improvement, so that we will find the ground sooner or later to start gaining height.

According to the Treasury, the future of the euro depends on what is going to happen in Italy and Spain during the next weeks. Would you agree? This is the first EU severe crisis and we are learning on the ground how to manage it. If current stress remained in Italy's and Spain’s sovereign debt markets, it would be a make-or-break moment for the euro. I am convinced that the European authorities will be able to reach an agreement about the kind of monetary, fiscal and politics union that country members may need in the medium term.

Sabadell has just been given Brussels’ approval to take the control of the Valencia region-based savings bank CAM. It was expected two months ago. What are the implications of this delay? It has meant some cost of opportunity. Every month of delay are months that you can considered as lost, because you cannot explain what you want to do. Anyway, we have had the fortune that the auditors have enable us to know the entity deeply, so that we have been punctually informed about all the important decisions which were to be made. And this is not a complaint at all about the work made by Brussels.