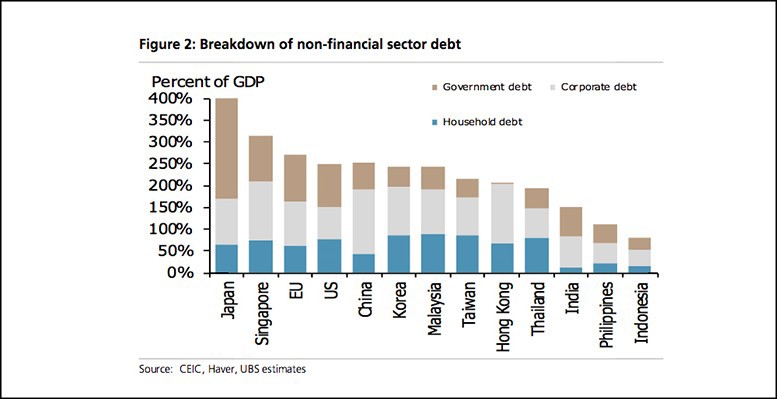 UBS | Japanese policymakers have largely succeeded at generating cognitive dissonance rather than resolving the economy’s fundamental challenge. As a reminder it’s not just about achieving a 2% inflation target. The deeper issue has always been that government debt, now around 250% of GDP, has been consistently growing faster than the economy for years. The 2% inflation target or nominal GDP targets are mainly important in that context. Investors have faced non- stop government assertions that Abenomics, led by the BoJ’s aggressive QE policy and now negative -rate policy, is working. However, most evidence argues the opposite. Inflation and inflation expectations remain weak, Shunto negotiations so far suggest disappointing wage growth this year, government debt is still growing faster than the economy, and yen weakness has stalled.

Why is it so hard to turn this around? Nominal GDP needs to grow faster than Japanese government debt. That can be achieved mathematically with policies that raise nominal GDP and slow the growth of government debt. That’s where inflation comes into the picture. However, here’s the catch. For two decades growing government debt has supported nominal GDP. How can policy makers cut fiscal support for the economy without depressing nominal GDP? One possibility is a large expansion in private sector debt, but private sector debt to GDP is not low; i.e., it’s challenging to believe that a rise in private sector debt could offset fiscal retrenchment. The other possibility is a wildly aggressive reform program that so far hasn’t happened. Lastly, of course, a weaker currency could play a role. In fact the currency has been doing most of the heavy lifting and that’s likely to be the case in the future. UBS FX expects the y en to weaken to 122 by year end if the Fed hikes in 2H16. We agree and that helps, but the yen has been weakening since late 2012 with little impact on the economy, government debt trend, or inflation expectations. The struggle continues