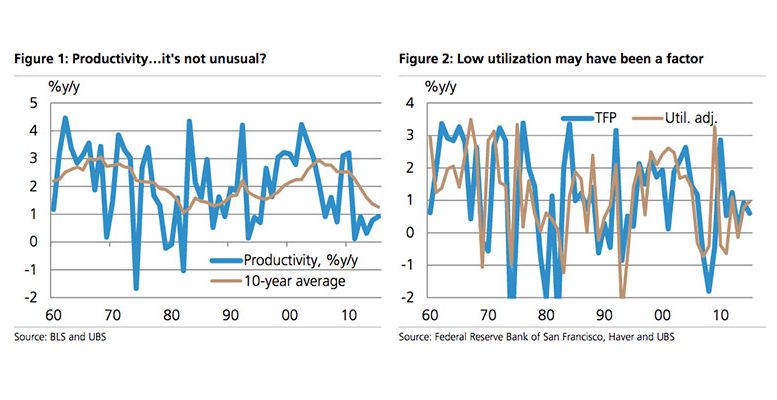 UBS | Since 2010 US productivity growth has been just over 1%, a deceleration not only from the long-term average but also weaker than the rate of productivity growth seen in the 70s and 80s. That said, a 10-year average does not look too low relative to history.

Labor productivity is the growth in the output of the business sector less the growth in the numbers of hours worked. Relative to the long -term average, the growth in output is 74bp lower than normal while hours worked is about 44bp higher than normal, despite low populat ion growth. Compared to the average, this combination has resulted in recent productivity growth 118bp below normal. Using a framework from the Federal Reserve Bank of NY (Stiroh, 2001), we break contributions to productivity into capital, labor and “total factor”, the latter the measure of how efficiently inputs are used during production. The sharp decline in the contribution of the capital stock accounts for almost all of the slowdown in pr oductivity. Labor quality has improved somewhat over the years while the contribution from total factor productivity has slowed versus the long -term history, but is now contributing more than at any time since the 1970s.