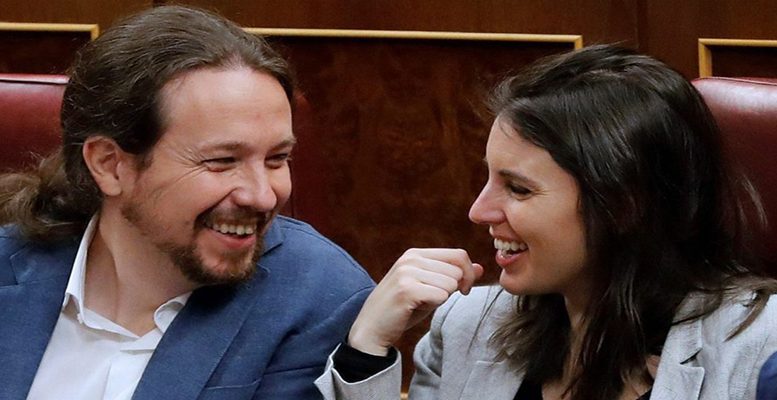 Pablo Iglesias next Spain's vice president and his wife, Irene Montero, likely next Minister for Equality

Before it has a president -Pedro Sánchez- Spain has known the names of half of its future cabinet members, the ones appointed by Pablo Iglesias, leader of Unidas Podemos and future vice-president of the PSOE-UP Coalition Government, who, to stress his independence and loyalty to PSOE and President Sánchez, has announced the names of the four ministers (cabinet members) that he, and not Sánchez, has chosen. A good start.
And among those names, we find his wife’s. Mrs Iglesias will be Minister for Equality. The fact that the vice-president has appointed his wife to a cabinet post would make anybody blush in any civilized country but Spain has drifted into a state of affairs in which if you are from the left, you are good – and if you are a liberal or from the right, you are not, and everything a government from the left does is good: in principle, by definition. Therefore what a vice-president from the extreme left does is, by definition, extremely good.
Consequently, Pablo and Irene, vice-president and Minister for Equality, have succeeded in not having anybody in Spain talking about nepotism. Incredible but true.
Shortly before the November 10 General Election, Sánchez said, “I would not be able to sleep at night if I had Pablo Iglesias in my Government”, neither he, nor “95% of Spanish people”, he used to say, among other reasons, because his economic recipes lead to “ration books” (as we have seen in Venezuela, where according to Unidas Podemos leaders people have three meals a day, which is not true, except in the case of the government oligarchs.)
Pablo Iglesias rose in Spanish politics by denouncing that a caste -represented by PSOE and PP- shared power without having the interests of citizens at heart. Something quite close to the truth. Five years later the Iglesias no longer speak of a caste. They will be part of the government and now they are part of the caste. Wasn’t that what it was all about?