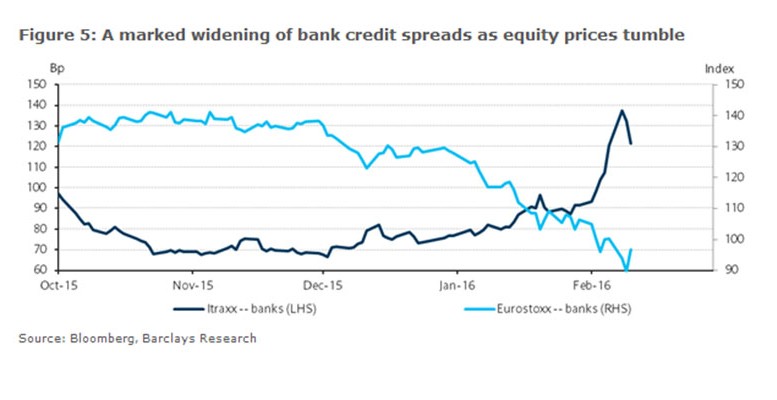 BARCLAYS | There is growing concern about the strength of the business cycle in Europe and globally. China continues to surprise to the downside, while markets are beginning to assign a meaningful probability of a US recession later this year. Markets are now wondering whether Europe’s growth outlook will remain unscathed.

Against this backdrop, European banks’ credit and equity have been heavily impacted: credit spreads and equity prices are at levels not seen since 2012-13. In our view, this market volatility and price action is not just driven by extreme negative sentiment: we do see both macroeconomic and banking-specific factors behind the recent selloff. In turn, financial market volatility has the potential to accelerate the downturn of the business cycle. This macroeconomic report complements the bank credit analysis in European banks: At an inflection point, 11 February 2016.

The 2008-09 financial crisis and the negative impact on the banking sector has created a significant level of non-performing assets. Following that crisis, banks have had to respond to significant regulatory changes, resulting in growing regulatory capital demands. Although the provisions and capital buffers have been raised against those problem loans, they do not look excessive . Therefore, we do not see the regulatory authorities relaxing the regulatory framework for banks – at least not without clear evidence of recession risk.

Since January 2016, a new European bank resolution framework (BRRD) has been enacted. To protect taxpayers from the costs of future banking system crises, the new framework makes “bail-in-able” not just bank equity and junior debt, but also senior debt and large depositors (above EUR100k). At the same time, and catching investors by surprise, in recent weeks there have been growing concerns about the strength of the business (and credit) cycle. These factors together have created a sharp widening in bank credit spreads over the past few weeks (Figure 5). In addition, the ultra-accommodative monetary policy of the ECB, with the deposit rate now at -30bp and the market fully pricing the depo rate at -50bp by H2 16, is squeezing euro area banks’ net interest margins.

The longer negative rates remain, the longer their profitability will likely remain impaired, unless euro area activity accelerates. However, this is not what markets seem to be pricing. Bank equity prices have fallen sharply to levels not seen since August 2012.

There are also a host of country- and bank-specific risks that add to the bearish market sentiment. Italy’s large stock of NPLs represents a handicap to the transmission of monetary policy (gross non-performing exposures at c.EUR350bn). Spain’s large share of floating-rate loans linked to 3-12m Euribor (about two-thirds of the bank assets by our estimates), combined with a negative policy rate, puts significant downward pressure on Spanish banks’ profitability.

On the positive side, the ECB’s ultra-loose loose monetary policy has helped reduce bank lending rates and improve lending dynamics, supporting the euro area growth outlook. There is, however, some incipient evidence of lending rates in France beginning to turn up and of stabilisation in Germany.We suspect this could be a reaction by French and German banks to boost their very narrow net interest margins.

We have stated consistently that investment remains a major source of uncertainty in Europe and globally. Prior to these market events, we had projected only a modest investment rebound as we saw only moderate growth in productive investment because of subdued growth prospects, high uncertainty and ongoing NFC deleveraging. These events add material downside risk to our investment outlook, as financing conditions have tightened, uncertainty has increased and bank lending conditions could turn. This may well pressure the fragile investment recovery and eventually slow consumption. All of these events put significant downside risk on the euro area’s 2016-17 growth outlook.

Where to from here?

We do not envisage any significant changes to the ECB’s gradual monetary policy approach. In other words, we expect further gradual steps on deposit rate cuts and QE expansion. The ECB may also insert a tiered system on banks’ deposits at the Eurosystem to soften the blow of NNR on banks, but not necessarily in March. And, in any case, if NNRs are set low for long, NIMs will be squeezed and, eventually, capital adequacy is likely to become a concern.

We do not expect bank regulators to ease standards, reduce regulatory risk weights and, ultimately, reduce capital requirements (at least not without clear evidence that growth dynamics have turned down sharply, which is not our base-case scenario for now). Hence, we expect banks to face a challenging regulatory and P&L environment. Consequently, we do not envisage any material change in bank lending dynamics, while loan demand is likely to remain constrained by ongoing deleveraging.

On the other hand, we see risks that lending conditions will tighten (at least) for some euro area economies. Under a more volatile and uncertain environment and with persistently high capital demands, banks may curb their lending while corporates may postpone investment and hiring decisions. Investment dynamics in Europe and globally still have a long way to recover towards pre-crisis levels and they may very well fail to do so.

In our opinion, these conditions will not be supportive of bank credit spreads and equity prices in the future, even if European bank-equity valuations might appear cheap by some metrics.

We believe only hard evidence of a slowdown or recession risk in the euro area could lead to materially different policy setting in Europe. Even then, it may take time for the European authorities to react with a combination of fiscal and monetary stimulus. With monetary policy at the zero lower bound or even below, fiscal multipliers would be higher and make fiscal expansion more efficient – if it is focused on investment; however, a coordinated fiscal response is not straightforward in Europe. This all means that economic and financial conditions may need to deteriorate further before there is a shift in policy action.

These market events add material downside risks to the euro area 2016 private investment and growth outlook. More generally, beyond the debate around the phase/shape of the current business cycle and its implications for European financial sector, we think that investors remain concerned about the long-term growth prospects of Europe.

These factors could put pressure on the long-term debt dynamics of the large euro area sovereigns such as France, Italy and Spain (not to mention Greece and Portugal). While a tail event, the negative feedback loop between sovereigns and banks could be reignited for some countries.