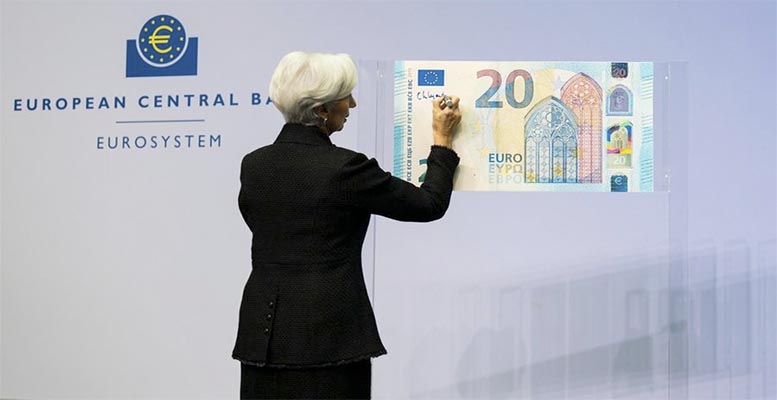 Bert Flosbach (Flosbach von Storch) | It is not without a certain irony that Christine Lagarde warned on 11 September that “our accommodative monetary policy needs the support of fiscal policy, and none of us can afford complacency in the present time.”

Reading this inevitably makes you think you have misunderstood something. The opposite, of course, is true. Governments want central banks to provide cheap money that makes it easier to fund their deficits, and central banks warn governments to practice sound budget management. Now, however, the central bank is asking governments to use the low interest rates to take on more debt and increase expenditures. Even the International Monetary Fund (IMF), which traditionally warns about excessive national debt levels, is recommending that industrialised countries worry less about their debt and instead take advantage of the low level of interest rates and use the cheap money for infrastructure investments.

National debt-to-GDP ratios have already reached historic highs. Gross national debt will likely exceed 260 per cent of GDP in Japan by the end of the year, and reach around 140 per cent in the USA and around 100 per cent in the eurozone. Concerns about the high level of debt being unsustainable in the long run are at least theoretically unjustifiable as long as interest rates and government bond yields remain close to zero. This is because zero interest rates allow practically any deficit or mountain of debt to be easily funded

The US budget deficit, for example, was greater than USD 3,000 billion for the fiscal year just ended on 30 September. Investors might worry that the massive volume of new bonds needed to fund the budget deficits could cause yields to rise again. In spite of the explosion in national debt, however, the volume of freely available US Treasuries in circulation has hardly increased, because the Fed is buying up excess bonds like a giant vacuum cleaner. It now holds more than one fifth of all US Treasuries outstanding. This is still small when compared internationally.

The Bank of Japan has led the field for years, with recent holdings of around 46 per cent of all Japanese government bonds outstanding, and the United Kingdom, where the figure is 35 per cent. This also illustrates
how blurred the line between monetary policy and fiscal policy has become. Even though central bankers worldwide (still) do not consider their institutions to be at risk and continue to vehemently deny accusations of providing monetary government financing, the question arises as to whether there is still any limit at all on government bond purchases. Even self-imposed limit don’t need to be permanent, as the ECB recently showed by omitting the upper holding limit of 33 per cent per government bond that applies to previous public sector purchase programmes from the Pandemic Emergency Purchase Program (PEPP). If the pandemic continues, the “limitless” PEPP could act as a source of government financing.

Interest expenses already no longer represent a major burden for
government budgets. If central banks continue to act as the buyer of last
resort and the yields on government bonds remain low, the interest
burden could become almost negligible for governments. If our expectations for national debt-to-GDP ratios turn out to be too low, this
would paradoxically lead to an even lower interest burden in some cases.
This applies to countries whose bonds predominantly have negative yields,
which generate interest income when a new government bond is issued.
A bond requiring a repayment of 100 will be issued at a price greater than 100 in spite of having a zero coupon. The difference between the issuing and redemption price is included in the government budget as an issuing profit.

That means the more the government borrows in future years, the lower
the interest burden, until the mountain of debt eventually generates interest and becomes a source of revenue. This might already take place in Germany before 2030, if interest rates remain unchanged and there is a substantial increase in the level of debt.

This should not, however, be seen as a call to assume unlimited amounts
of debt, but instead merely shows how permanently low interest rates can
massively reduce the pressure on government budgets. Debt financing like this could be thought of as a perpetual motion machine or cascade system. The situation naturally cannot continue forever, and one has to ask how long it might last. The apparent “free lunch” has a Sword of Damocles
hanging over it, namely the risk of a loss of confidence in the currency or, more precisely, its ability to preserve value. Confidence would be put to the test if inflation were to significantly exceed the two per cent mark and central banks provided reassurance by classifying the change as temporary. The newly created money, however, is still stuck in the Keynesian liquidity trap. In the eurozone, for example, the M1 money supply, which includes currency in circulation and private household and company demand deposits at commercial banks, has risen a good 10 per cent since the beginning of the year. In the USA, Money Zero Maturity (MZM), which includes other readily available money in addition to currency and demand deposits, recorded an even larger increase of
25 per cent over the same period. However, as long as the money remains in accounts or is used to buy real estate, it has little or no effect on the demand for and prices of goods and services.

This could change if people became optimistic again because a vaccine allowed a return to normality and the economy picked up again. Because no central banker wants to take the risk of triggering a financial and
economic crisis, we think it is very unlikely that central banks would respond by tightening monetary policy and raising interest rates again.

Whether one can take the significant increase in the demand for investment gold due to the pandemic—as shown by the inflow of funds into gold ETFs— as an indicator of increased inflationary expectations is another matter. It is noteworthy, however, that the volume in gold ETFs hasmore than doubled since 2016, when eurozone government
bonds first had negative yields, increasing from around 1,500 tonnes to around 3,400 tonnes. The price of gold rose more than 40 per cent during the same period.

Low and negative interest rates clearly also have a positive effect on the price of gold. Although gold pays no interest, it also has no negatives, if one ignores the cost of storage for the moment (around 0.1 per cent p.a.). The opportunity cost of lost interest income was previously a burden for
gold investors. The opposite is true today. Gold is more profitable than German government bonds (Bunds), which have yields between minus 0.76 per cent (three-year maturity) and minus 0.11 per cent (30-year maturity).

Although US Treasury yields are still slightly positive, their attractiveness compared to zero-interest gold has also fallen to an historic low. Yields this low indicate the bond market is still showing no worries about inflation. Otherwise, German Bund investors would scarcely accept a guaranteed nominal loss of five per cent over 10 years, or, when buying a 30-year
bond, be prepared to suffer a total loss of three per cent until 2050.

In our view, the likelihood that buying and holding securities like these to maturity will outperform a zero-interest investment in gold is almost zero. One could, of course, object that permanent deflation turns negative nominal yields into positive real yields and increases the attractiveness of bonds versus gold. This scenario would, however, imply a global economic
crisis and a collapse of social security systems, which is why one can reject it as purely theoretical or or see it as just another reason for investing in gold. Gold therefore hedges two ways. First, against inflation and, second, in the event that it does not occur.