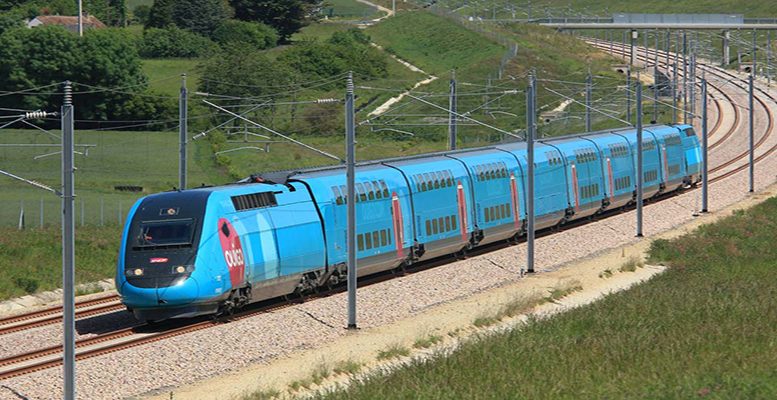 T.C. | Coinciding with the end of the state of alarm in Spain, the French ‘low cost’ Ouigo -subsidiary of SNCF- has today, Monday, kicked off the liberalisation of passenger trains in Spain. With five daily high-speed trains between Madrid and Barcelona, two of them stopping in Zaragoza and another one in Tarragona, and at really competitive prices: from 9 euros for adults and with a flat fare of 5 euros for children up to 14 years old.
After 80 years of Renfe’s monopoly, Ouigo is allowed to operate on the high-speed lines Madrid-Barcelona, Madrid-Valencia and Madrid-Seville. Italy’s Ilsa will also start operating in the same market next year.
As a reaction to Ouigo’s challenge, on June 23rd Renfe will launch its own ‘low cost’, AVLO, with prices starting at 7 euros, four daily frequencies per direction and more stops (Zaragoza, Lleida, Tarragona, Girona, Figueres, Calatayud and Guadalajara).

Initially AVLO should have started operating in April last year and Ouigo in December, but the pandemic and restrictions forced the debut’s postponement. Spain’s 3,806-kilometre high-speed network is the second longest in the world, but it is clearly underused. “Liberalisation aims to remedy this situation,” according to Adif president Isabel Pardo de Vera. To begin with, when it is at full capacity, the offer will be increased by 65 percent (50 percent on the Madrid-Barcelona line, 40 percent on the Madrid-Valencia and 60 percent on the Madrid-Seville).

“We want to popularise high speed and be the means of transport for the whole family, children, the elderly and pets”, said Hélène Valenzuela, General Director of Ouigo Spain. All tickets are customisable, and the basic fare from 9 euros includes hand luggage and 1 cabin baggage, as well as the option to change the ticket holder until the day before the trip. For an additional 9 euros, the company offers ‘Ouigo Plus, a ‘pack’ that includes extra services: choice of seat, the possibility of reserving an XL seat, an additional piece of luggage, and connection to ‘OUIFun’, the company’s entertainment platform.