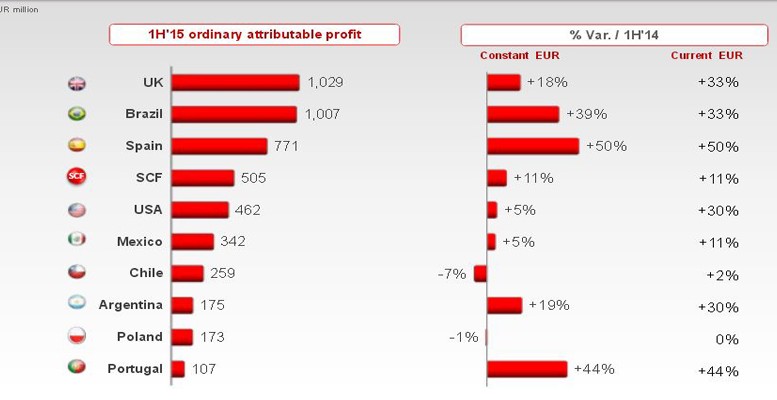 Banco Santander’s results were achieved in the context of an uneven economic performance across the different countries where it operates. Countries like Spain,  the U.S. and Poland are expected to grow more than 3% this year; the U.K.,  Mexico and Chile, more than 2.5%,and Germany and Portugal, over 1.5%. Meanwhile, Brazil and Argentina will register a decline in economic activity. Official interest rates in euros, dollars and pounds continue to beat historic lows.

The improvement in first half profits is a result of a 12% rise in revenues, compared with an 11% increase in costs. This allowed for a continued improvement in the bank’s efficiency ratio to 46.9%, which makes Banco Santander one of the most efficient financial institutions in the world.

Net operating income, the difference between income and costs, grew 13% to EUR 12.256 billion. This increase, together with the 5% decline in loan loss provisions, means that net attributable profit rose 24% to EUR 3.426 billion. That figure does not include the EUR 835 million from the reversal of tax liabilities in Brazil, which allowed the bank to strengthen its capital ratios.