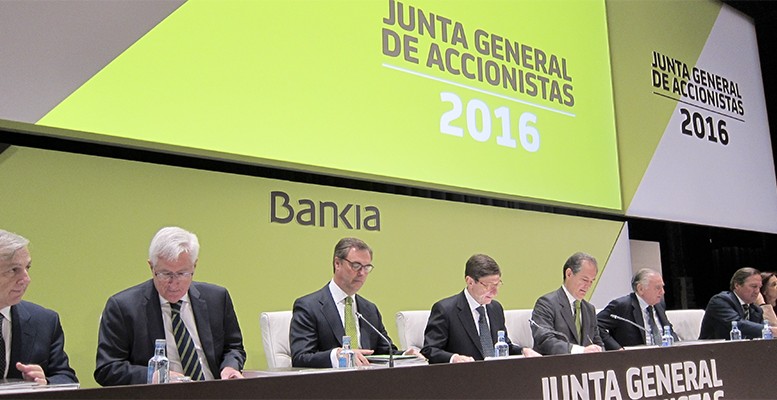 Bankia, the lender which had to be bailed-out in 2012 with more than 22 billion euros of taxpayers’ money, is in the news because of the money it has now returned to its minority shareholders. Not for being the Spanish bank which recorded the biggest profits last year.

Its Annual Shareholders Meeting (AGM) held in Valencia on Tuesday was the calmest in the last few years and this figure caught everyone’s attention: the 358 million euros which the bank has paid back in just three weeks to 76,443 shareholders who participated in Bankia’s IPO in 2011.

However this amount only represents 20% of the 1.840 billion euros that the bank has calculated it will  have to hand over to the 200,000 shareholders who bought into the IPO.

Bankia’s chairman, Jose Ignacio Goirigolzarri, has succeeded in calming the situation to such an extent that there were not even any protests ahead of the AGM. But everything has a price: the preference shares and the IPO have cost the taxpayer over 3.8 billion euros up to now.

Bankia’s reputation was seriously dented not only because of its preference shares and the IPO, but also because of its “black cards” and the disastrous management of its two previous chairman Rodrigo Rato and Miguel Blesa.

Goirigolzarri is a bank manager with a proven experience and an excellent reputation, who has managed to pull Bankia out of a hole. That doesn’t mean that all his decisions are right. The most controversial one, without doubt, is giving back the money to the minority shareholders. Particularly when Bankia’s current chairman continues to defend the IPO and insists there was no fraud involved. Is it better to give the money back even though you don’t agree with the Supreme Court’s ruling?

Contrary to appearances, the bank’s strategic plan was also discussed during the AGM. This will focus on maintaining Bankia’s leading position in the areas of efficiency and profitability.

But the new plan was practically overlooked. What really interests everyone is something else: finding out when the taxpayers will recover their money and how much that will be. Once Bankia has paid its second dividend, it will have returned a total of 1.626 billion euros of the 22.400 billion it received as a bail-out.