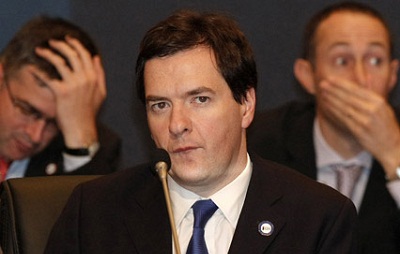 LONDON | The sterling on Tuesday was mostly unmoved by the light controversy between some of the top ratings agencies regarding the UK’s triple A qualification on its government debt issuance. That is the highest grade, only to be found over the so-called core European countries.

A day had barely passed after Standard & Poor’s said the British AAA was solid, when Moody’s noted that an increasingly weak economy poses a risk to it and it deserved a negative outlook attached as a precaution. The exchange against the euro and the dollar, though, remained at the same levels.

In fact, the common view in the financial City of London gives a few more sessions to the current optimism on the markets. BlackRock’s senior adviser Bob Doll suggested an explanation: ‘muddle through’ is the new ‘up-cycle’.

“Investors remain focused more on macro trends and issues than on market fundamentals,” Doll said. “In particular, investors’ ability to shrug off a period of earnings weakness as they focus on additional policy help suggests that the current equity bull market still has some legs.”

In short, the markets still feel confident that the European Central Bank governor Mario Draghi will follow his words with some sort of action. Any support the Spanish and Italian sovereign bonds may receive would translate into a calmer, more recovery-prone economic environment in the euro zone. Or so investors believe.

But the Moody’s alert to Downing Street shouldn’t be dismissed too quickly. Today, the British insolvency trade organisation R3, which represents 97 percent of all insolvency practitioners, released its estimates of 146,000 zombie businesses at the brink of default.

To qualify as zombie, R3 explains, a company must be unable to reduce its debt but pay interests only, be unable to pay its debt at all in the instance that interest rates rise, or struggle when debts mature and be in need of renegotiation of payment terms with suppliers.

“Essentially, a zombie business is one that is on the edge of insolvency but has been holding on, often for a prolonged period of time,” said R3 president Lee Manning.

“The danger for businesses that are teetering on the edge is that any change of circumstances, such as a rise in interest rates, the loss of a major customer, or suppliers upping their prices, will mean that they will not be able to hang on any longer.”

R3 remarked in its report that the retail sector had featured prominently across all zombie business indicators.

“Devastation on the high street is well recorded,” Manning added. “Since the start of 2011, over 21,000 jobs have been lost from the failures of major high street names, but we are yet to see the volume of construction failures that we would expect.”

Whitehall better doesn’t get much carried away by the Olympics’ emotion-charged entertainment.