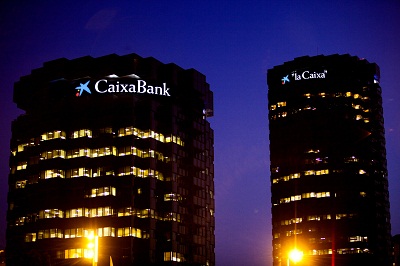 Should Banco Santander and BBVA watch out for this one? The absorption of Banca Cívica, approved on Monday by Caixabank’s board, will create the leading bank in the Spanish market, with assets of €342 billion, stock market capitalization in excess of €16 billion, 14 million customers and an average Spanish market share in deposits of 14.0%, in customer loans of 13.4% and in total assets of 10.5%.

“thanks to CaixaBank’s strong capital position, will have an manageable impact, with ratios holding above the levels demanded by Basel II, Basel III and the European Banking Authority”.

The move will see current Banca Cívica shareholders offered a swap of 5 CaixaBank shares for every 8 Banca Cívica shares. The share swap proposed by CaixaBank, which implies pricing the bank at €977 million at market value on March 23 (€1.97 per share), was agreed by the boards of directors of the four savings banks that are shareholders in Banca Cívica (Cajasol with 16.1%, Caja Navarra 16.1%, CajaCanarias 11.8% and Caja de Burgos 11.3%).

The merger by absorption is expected to be finalised in the third quarter of this year. The operation will require no state subsidies. Banca Cívica will implement extraordinary provisions prior to the merger. Also, according to the CaixaBank communicate,

“the €977 million that Banca Cívica received in financing via FROB (the Fund for Orderly Bank Restructuring) is expected to be returned within 12 months after the merger is completed.”

AZ Capital and Deloitte assisted CaixaBank as financial consultants, while investment bank UBS conducted the valuation of the operation.

Enrique Goñi, Co-Chairman of Banca Cívica, underlined the importance of

“the entrance of Banca Cívica’s founding banks into the IBEX 35 via CaixaBank. It is an achievement that was unthinkable just two years ago.”

There will be a value adjustment for Banca Cívica assets of near €3.4 billion, which will be registered against reserves, with no impact on earnings. The resulting bank would have a “pro forma” Basel II core capital ratio as per December 2011 of 10.4%. The pro forma CaixaBank NPL ratio following the transaction will stand at 5.5%, below the 7.62% sector average, with a coverage level of 82%, compared to the Spanish sector average of 58.2% as at 31 December 2011. The merged bank’s €24-billion liquidity will cover wholesale debt maturities due over the next three years.

CaixaBank has confirmed its intention to maintain its 2012 dividend at 0.231 euro per share. Likewise, CaixaBank will maintain its quarterly shareholder remuneration policy for March, June, September and December, combining a cash dividend payment with its scrip dividend programme.