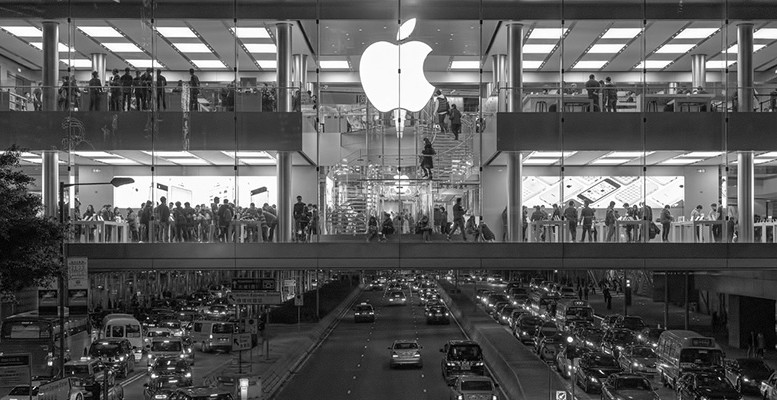 UBS | A recent appearance on CNBC put us in the position of defending Apple’s uniqueness. Anchor Joe Kernen argued that the history of computing is one of disruption, so how could Apple’s stock ever be worth $1 trillion? Our price target has never reached $1 trillion, but the point remains that to be a successful investment Apple needs to grow to an unprecedented size based on sustained differentiation. One view is that the consumer experience is never “good enough,” stifling the traditional threat from below. An even stronger point is that Apple avoids disruption by purposefully raising customer requirements — the key is managing customer expectations.

For years we have emphasized that competitive advantage periods are short in technology and that the longer a company is successful, the less likely it is to continue a winner. Our ranking of the top 15 market caps by decade shows only Intel and IBM making it across decades. Apple was added around 2008, a relative newcomer. Still, P/E expansion depends on confidence that Apple is more than a flash in the pan. Ben Thompson thinks that Christensen’s disruption threat applies less to Apple because, unlike for businesses, the user experience can never be good enough for consumers. Consequently, the smartphone market has high and low ends with low – end competitors unlikely to threaten Apple. Even high – end rival Samsung is fading.

Bending the needs curve up

Alex Danco takes the argument a step further. Disruption occurs because vendors tend to improve product functionality faster than customer needs rise, so the usual advice is to avoid disruption by introducing your own low – end products. However, Danco says Apple takes a different approach: actively moving the customer requirement curve higher, even to a point that Apple can’t meet. The company is able to continuously raise the ceiling on user experience such that low – end competi tors never catch up. Apple is creating the rules of the game, ensuring differentiation.