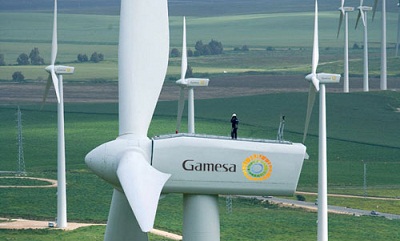 LONDON | The Spanish wind energy firm Gamesa announced Friday it will pursue an agreement with the Port of Leith for the set up of a major offshore manufacturing base in the UK. The project would include blade and nacelles plants, port logistics and operating and maintaining services.

The company estimates that the new British manufacturing base could create about 800 new jobs, with an initial investment of about €150 million. Gamesa said this deal confirms its long term strategic relationship with the UK and a commitment to establishing the UK as the centre of its global offshore wind activity. Gamesa chairman and CEO Jorge Calvet commented:

“If market conditions are favourable this would mean many high quality jobs for the area […] The selection of Leith, as our preferred partner aimed at establishing a UK manufacturing base is only a first stage, but an important one.”

Gamesa reported that its decision to pursue discussions with the Port of Leith followed a detailed search to identify a partner port which would meet the Spanish company’s requirements, and pointed out that a wide range of governmental authorities had participated throughout this process. Prime minister David Cameron welcomed the initiative:

“This is fantastic news for Scotland and shows that the UK remains an attractive place for foreign investment.”

In 2011, Gamesa established a facility in Strathclyde, currently employing over 60 engineers and which is expected to employ 180 people. The company will soon move its global offshore wind headquarters to its new London offices.

Gamesa is listed on the Ibex 35 and forms part of Dow Jones Sustainability, FTSE4Good and Ethibel sustainability indexes.