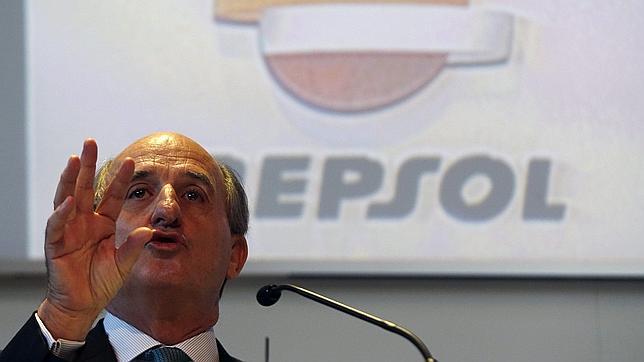 This time last year, president of Repsol Antonio Brufau appeared very angry during the annual Shareholders General Meeting. When talking about some company’s debt items, he said repeatedly: “now, this is Mrs Kirchner’s debt.” In the current year’s meeting, the president was much more relaxed and insisted on the idea that Repsol would use all legal devices within reach in order to receive a fair compensation for the YPF’s expropriation.

Brufau on Monday met Repsol’s Board of Directors to consider a proposal from Argentina’s government according to which Repsol would drop their dispute on YPF without any economic compensation and be given in return some stake of a joint venture company to develop 6% of Vaca Muerta’s field oil and gas reserves.

The proposal came to Brufau not directly from YPF but via Repsol’s core shareholders La Caixa, Pemex and Sacyr, who would have put pressure on the president to resume negotiations with Argentina, and especially to seek an agreement that solves YPF’s expropriation. Core shareholders’ deadline to present some progress of the negotiations would be mid July. The markets must wait for Brufau’s final answer, but Spanish analysts bet that he will stick to his intention of being compensated by assets as much liquid as possible and will consider the offer insufficient.

As commented by ACF experts, “having access to Vaca Muerta by a minor stake that needs further investments to develop the field does not seem the better option for Repsol a priori. Argentina’s government will keep on holding the control over Vaca Muerta because it is the responsible for the expropriation, and consequently Repsol would be again a partner of an expropriator country.”

According to the offer conditions, the resultant company would be valued at around $3,5 billion. Repsol would have the ownership of 51% and Pemex of 2%. Furthermore, the Spanish firm would receive Argentinian bonds valued at $1,5 billion, which should be invested again on the new company. At Santander investment house, analysts consider that “Repsol will reject the agreement while keeping open the negotiation possibilities as well as the legal actions against YPF, for which they demand a $10 billion value. Furthermore, Repsol would only accept the deal on the condition that any compensation would be paid through strong currency outside the country, not by a stake in an oil reserve that needs a significant investment and would not give legal guarantees to repatriate its profits.”

As reported by FT the Argentinian proposal involves a Vaca Muerta’s implicit price of $42,000 per acre; however, the most quality non conventional assets in the US are valued at $14,000 per acre. Sabadell’s economists also agree that “a rejection of this initial offer by Repsol would not be a surprise since it could overvalue the portion of Vaca Muerta included in the joint venture.” According to their estimations, this portion would reach approximately 1,920 km2 against 12,000 km2 for YPF, and 30,000 km2 of Vaca Muerta’s whole extension, which means a net portion of 902.4 km2 for Repsol . “If this piece of the field had a similar potential to the one that YPF has already explored, it could achieve a maximum value of €3 billion, which would be an interesting price provided that the gas amount in the deposit were relevant,” the experts say.