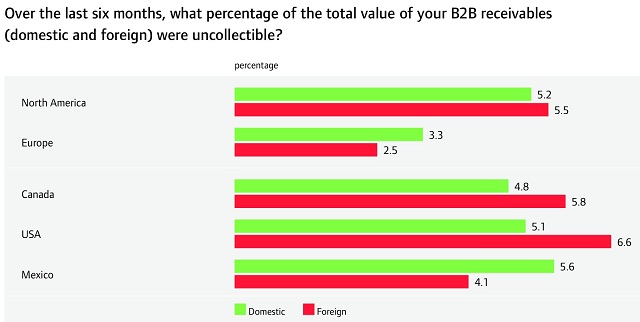 “Insolvencies in the United States have been declining for the past two years,” said Andreas Tesch of credit insurance group Atradius. But “the survey responses showing an increase in uncollectable receivables highlights the fact that lower insolvency rates do not necessarily translate into fewer payment defaults. To the contrary,” he added.

Tesch comments during the presentation this week of the Atradius Payment Practices Barometer‘s 2012 edition were replicated in Madrid, too. “Exporting to the US has become riskier for a Spanish company,” Pavel Gómez del Castillo explained at Crédito y Caución, which is part of Atradius.

Overall the percentage of late receivables has not increased that much in North America in 2012 compared to 2011, according to the study. However, more of these overdue receivables are remaining outstanding longer and more are resulting in payment defaults.

As a resul, the average days sales outstanding (DSO) across the region has also been creeping up. Approximately 23.3% of the survey respondents experienced an increase in their DSO over the past 12 months compared to 7.8% for whom DSO decreased.

In the opinion of Richard Ariens, regional director of Atradius, though, green shoots may be behind payment transaction’s poor behaviour. “The climbing rate of payment default highlights that this remains a very unstable period in the economic cycle,” yet “business insolvencies remain at high levels as businesses often pursue growth too aggressively overestimating demand in the early stages of the recovery.”

Be the first to comment on "US business to business default rate 2.6% higher than in Europe"