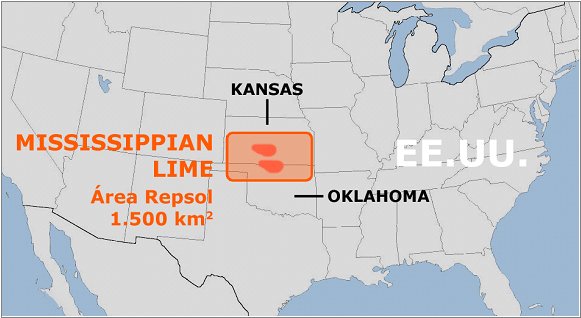 Not much longer than five years ago, Repsol was not operating in the United States. Currently, the company produces in the country around 40,000bpd. As of December 31 of 2012, Repsol’s exploration and production division holds mining rights to 473 blocks located in the Gulf of Mexico and Alaska, as mentioned in the company’s annual report presented Friday at the General Shareholders Meeting.

Additionally, Repsol participates in the non conventional resources project Missisippi Lime, just between the states of Kansas and Oklahoma. The Upstream activity represents the company’s main driver for growth in 2012-16 and the US will be one of the main focus. The Spanish company bet on oil exploration and production will be maintained up to 2016 with annual average investments of €2,95 billion. Repsol’s sites in the United States will receive 30% of that amount, followed by Brazil, which will be assigned 21%. According to Antonio Brufau, the oil firm’s president, production in the country will grow at around 17% until 2016, only after Trinidad and Tobago, “a very Anglo-Saxon nation,” where this activity is to increase some 24%.

Furthermore, Repsol is to develop very relevant projects in Russia, “a place also inconceivable to have business with some years ago,” Namibia, Australia, Bulgaria and Aruba. “Therefore, these are very good news since in the ratio profitability/risk, the influence of the second is not going to be so high, and it will be easier for us to avoid non-expected events,” Brufau said in a clear reference to YPF’s loss.

It has been one year long since YPF was separated from Repsol. The wounds seemingly have been healed. Despite the “big drama of losing an asset so cared as YPF was, Repsol’s net profit in 2012 increased near 14,1%, excluding the Argentinian company,” president Brufau said. He also explained that the company’s intention is “not to recover the asset, but to receive a fair compensation for the loss; otherwise, that operation would be named confiscation.”

Repsol’s Downstream division, which includes the refining activities, has got a milestone in 2012 with the recovery and improvement of the company’s plant in Cartagena, Spain. “ We could have decided to close the factory following the tendency of our counterparts in Europe. They prefer to invest out of their frontiers, in Saudi Arabia, for instance, because they are given subsidies there, but we bet on our own territory, on Spain’s economy.  So we can say that today Spain is an oil derivatives exporter.”

Be the first to comment on "US minority shareholders invest €1,5 billion in Repsol"