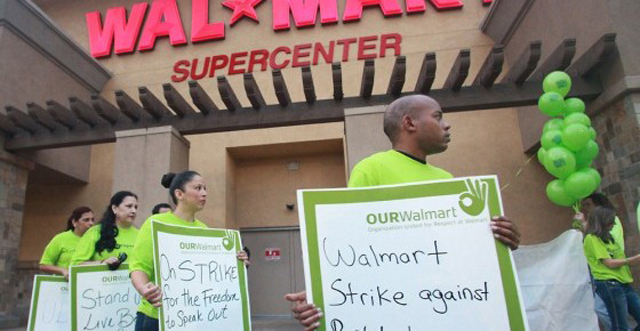 Black Friday is retailer’s day of the year in the U.S. After Thanksgiving dinner on Thursday millions of bargain-hunting Americans are expected to run to the shopping malls for lightning perks and deals. Some are even planning to eat dinner while standing in line.

One of the most famous chains to celebrate Black Friday is Wal-Mart. With around 1.3 million workers, it is the biggest private employer in the world. Although Forbes magazine has ranked it among the best 100 corporations to work for at an executive level, unions and human rights watch groups have repeatedly challenged its business practices towards workers.

This 2012 Black Friday edition Wal-Mart is facing the biggest demonstration day in its 50-year-history. Workers at 1,000 locations across the U.S. are outraged that stores are opening at 8 pm on Thanksgiving, which means they won’t be able to have dinner with their families. To protest this opening they plan to strike and in some cities they have already started to walk-off their jobs.

“I am supposed to start my shift at 23 pm on Thursday night but I won’t go. Along with 25 percent of my 400 colleagues I will go walk out for fair labor practice outside the store,” explains to The Corner Josué Mata, 28 years old. He has been working for 13 months in the maintenance department of a Wal-Mart store in Dallas, Texas.

For years, Wal-Mart workers have been fighting over pay, affordable health care and their right to unionize. “We are talking about the biggest anti-union company of the world,” says Josué Mata. “They have unions in other countries like Argentina, Chile, Brazil, South Africa, Japan, but not here because the right to become part of a union is optional so the company takes advantage of that.”

The United Food and Commercial Workers International Union (UFCW) is baking up the protests along with other activists by supporting the groups OUR Walmart and Making Change at Wal-Mart and a watchdog group Corporate Action Network. They are facing charges filed by the giant retailer, as a UFCW spokesperson confirmed to The Corner. He refused to make further comments.

Whereas in Europe unions are part of the labor culture and workers are used to expect and demand some basic guarantees, in the U.S. organized labor is not that common. In the private sector just 8% of workers belong to unions. According to a research from Kate Bronfenbrenner called No Holds Barred: The Intensification of Employer Opposition to Organizing, “It’s not that private sector workers are less likely to want to be in unions, it’s that their employers are intensifying their opposition to them joining.”

Josué Mata insists that Wal-Mart is employing retaliatory tactics against workers and even violating their right to go on a strike. “Although it is protected by federal law they threaten us with getting fired,” he states. However he has already made up his mind. “It’s a real struggle to work for the first private employer in the world and not being able afford my own place and health care.”

Are big changes expected? Experts don’t agree. Some believe that the sales are not going to be affected and customers will feel sorry for Wal-Mart workers for 5 minutes before rushing into the shops. They might sign online petitions but will not vote with their wallets.

Others think this campaign is generating a big social media blitz (watch this YouTube video as an example) that can at least force the company to put in place some damage control.

Wal-Mart has sent a statement to the media: “This is just another exaggerated publicity campaign aimed at generating headlines to mislead our customers and associates [how the company calls its workers as part of its aimed ‘family culture’]. We’ll have more than one million associates working throughout the holiday weekend and they’re excited about our Black Friday plans this year. This is the Super Bowl for retailers and we’re ready.”