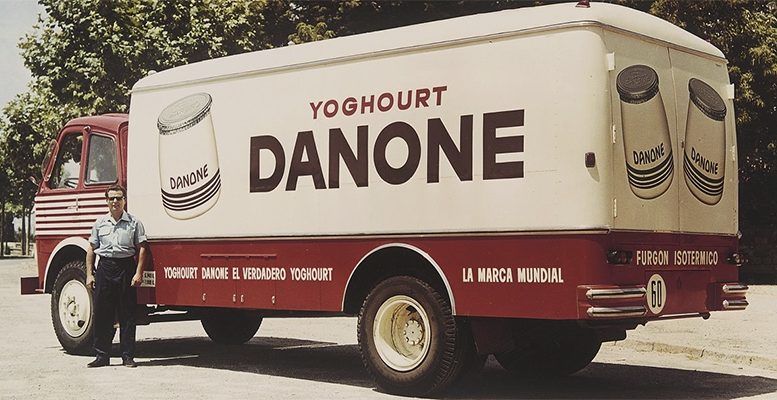 Danone was founded by Isaac Carasso in Barcelona in 1919.In the 1950s, they used this amazing truck.

Danone’s strategy is based on four pillars: (i) manufacturing products which are focused on Health and Wellbeing, (ii) developing strong brands (iii) diversifying geographically across developed and emerging countries, with the priority on the latter and (iv) betting on R&D.

On June 14, Danone announced an upward revision to estimates for its operating margin for this year, quantifying it at between 50 and 60 bps (compared with its previous forecast for a “solid improvement”). It also said it would make an adjustment in the pace of its investments in certain emerging markets (in particular in China). Furthermore, the company confirmed that it hopes to increase revenues this year by between 3 and 5% (vs 4.2% consensus) and maintained its long term objective for “strong, profitable and sustainable growth.”

The company also said it expects an improvement in sales’ organic growth in Q2’16.

Danone’s business model is based on strongly differentiating its product, which allows it to maintain a good negotiating position with distributors. Its strategy is also clearly focused on its health division, which has good growth prospects. Furthermore, the company has high exposure to countries with ample growth potential.