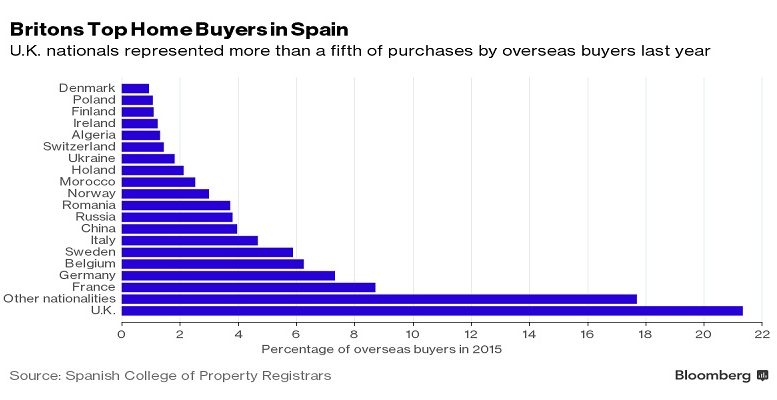 The British community in Spain is the largest in the EU: there are 297,000 Britons resident in Spain, according to January data from the National Statistics Institute. After the political earthquake created by Brexit, a large part of this community is now seeking dual nationality from the Spanish government to protect their rights as European citizens. For this to happen, there will have to be a change in the Spanish law.

To this end, some 25,000 people either born in Spain or residents who have worked there for over 10 years have organised a petition which has gathered over 1,500 signatures in just one day.

“This began because tens of thousands of Brits have made their homes, careers, lives and family choices in the belief that making a long-term commitment to Spain –  being part of the economy, paying taxes, contributing to social security – was possible and safe because they were EU citizens, explains Giles Tremlett.

“That has now changed. Most of us were unable to vote. Everyone would have voted Remain. And, now that it is being snatched away, many of us also realize how important the Spanish-European part of our identity is to us,” he adds. Tremlett and William Chislett, both authors of various books about Spain, are the people behind this initiative.

There is a potential dual impact from Brexit for British expats in Spain.

Firstly, there is the impact for long-time residents, who have a NIE (foreigners tax identification number) and have paid into the country’s social security system. For people in this situation the impact will be limited: they may have to renew their residency permit more regularly, for example every two years. Currently long-time residents’ permits are indefinite.

What about the loss of other privileges? J. M. has been working for 33 years in Spain, having also previously worked 12 in the UK.

“The only thing that occurs to me at the moment – and we may not lose this in the end – is the following: if you are an EU member, then you can apply to take your pension early in Spain (and other countries I suppose) even though you have not worked for the statutory 35 years here. You can “add on” the years you have worked in the UK and paid national insurance there. So if I wanted to take my pension here at the end of this year, I could “use” my UK years…it does not affect the amount of the pension (you don’t have access to the UK funding) but it means you can retire earlier here.”

Secondly, there is the impact for those expats who retired to Spain (particularly on the Spanish coast) and all their income comes from their UK pension and other savings they may have there. They could be severely affected by the depreciation of the pound, which will drop further if rates are cut in the UK  – something which is on the cards to stimulate demand against a backdrop of an expected slowdown due to Brexit. Another problem is that many of these retired expats have not formally registered with the social security in Spain so they are not in the national health system, thus dependent on EU reciprocal health care.

This situation might lead to some of these pensioners selling up and going back to the UK. Something similar ocurred in 2008-2009 when the pound was weak and many retired expats faced serious problems to pay the bills. Some homes were just abandoned on the coast as people returned to the UK.

William Chislett has also been working for more than 30 years in Spain. Brexit does not affect his future, but as co-promoter of the petition defines accurately its objective.

“We think the discrimination against Brits in Spain regarding the issue of double nationality compared with Spaniards in the UK is unfair. Here we need to be a resident for at least 10 years, while over there only 5 years is required. In addition, Spaniards can keep both their passports in the UK, while Britains in Spain with dual nationality can only hold on to one passport, with the Spanish one subject to being confiscated.”

Allowing dual nationality for long-term residents would mean a change in Spanish legislation. But those who have signed the petition appeal to the fact that in 2015, Mariano Rajoy’s government offered dual nationality to the descendants of Jews who were expelled in 1492. So it would not be the first time an exception was made.

“It will accumulate valuable human capital for Spain,” says Tremlett.

“It’s not about creating a burden on the health or pensions system,”adds Chislett.

For the time being, British residents in Spain have not received any information on how Brexit will pan out, neither from their Embassy nor from the Ministry of the Interior. This only increases the uncertainty. There is a statement from the British Ambassador on the Embassy’s website, saying that nothing will change immediately. But this is no more than the “standard” political line as negotiations on the UK’s exit are not likely to start before a new prime minister is in place in the autumn. And it will be a slow process.

For its part, the Justice Ministry said: “With regard to the petition received from the British expatriates, we need to remember that Spain still has a caretaker government. And until parliament is formed on July 19, it cannot legislate. So it is early days to consider such an initiative.

It’s also too early to say whether the demand for Spanish nationality on the part of British citizens has increased. We will start to get an idea from the numbers sitting the exam which will take place on July 28 in the Cervantes Institute, which handles the tests required to obtain Spanish nationality. After these exams, the Cervantes Institute has to correct the tests and publish the results.”

The British community is the third largest in Spain after the Romanian and Morroccan, and just ahead of the Italian.