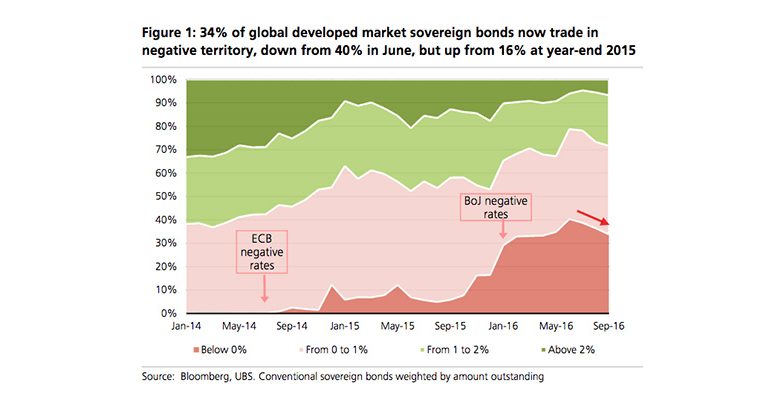 UBS | The recent fixed income sell -off has seen the proportion of developed market sovereign bonds trading in negative yielding territory drop to 34%. This compares to 40% at the end of June. Still, 34% is more than twice the level observed at the end of 2015. We argue that a sustained high proportion of negative yielding bonds has important implications not only for regions where central bank policy rates are negative, but for global fixed income market dynamics as a whole.

Evidence from the Eurozone and Japan

In the aftermath of the ECB’s deposit rate cut into the negatives in Jun -14, Eurozone investors’ net purchases of foreign bonds increased significantly. Meanwhile, foreign demand for Eurozone debt cooled and turned to net selling. In Japan, domestic investors have bought record amounts of foreign bonds in the six -month period following the BoJ’s Jan-16 rate cut. When combined, Japan and Eurozone demand data suggest US bonds to an increasing extent have been favoured among overseas markets. To provide some context, Japanese and Eurozone investors alone absorbed the equivalent of nearly all US Treasury net supply in Q1 2016.

Will the recent back-up in yields soften demand for relative high-yielders?

For Eurozone investors, the relative attractiveness of overseas bonds has increased as yields have drifted higher. Japan is a more complex case – FX-hedged overseas yields are at their least attractive levels in years. Still, the potential for more unhedged purchases could provide some offset. The outcome of the BoJ’s comprehensive assessment will no doubt be important for the near -term path of Japanese demand. Overall though, in a macro environment still characterised by low inflation, slow trend growth and accommodative monetary policy, the allure of relative high yielding rates markets is likely to persist. Ultimately, we see this as supportive of yield convergence.