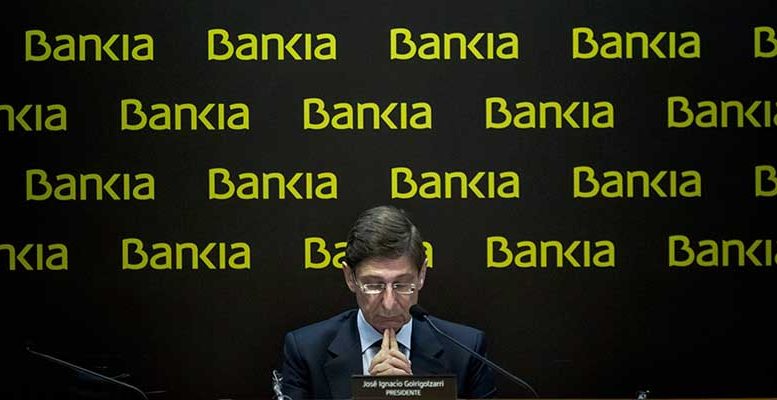 When the former CEO of BBVA, José Ignacio Goirigolzarri (62) arrived at Bankia in 2012, the most critical year for the bank (19.2 billion euros of losses), everyone celebrated his appointment. They saw it as a guarantee that Bankia would succeed in getting back on its feet within the planned timeframe, not only in terms of its business but also terms of its stock market valuation.

Being successful in this task was particularly important given that the FROB plans to sell the 60% it still holds in the lender before end-2017. And in order for this organisation (and the State, or the tax payers in the end) to recover as much as possible of the 22.4 billion euros which it put up to restructure the bank, it’s crucial that Bankia’s share price reaches a level in line with its financial and management ‘performance’.

Something which is obviously not happening. The former BBVA CEO (who had done a great job in that bank) has achieved a good part of his objectives at the helm of Bankia, which was founded, as we know, in 2010. But investors are not convinced by the stock; they are not buying.

After the bloodbath in 2012, Bankia’s current chairman implemented a complex plan to restructure the bank’s balance sheet and relaunch its commercial activity, a move which was applauded by the experts. The bank was one of the most expeditious in getting rid of its property burden and over the last year and a half has eliminated 5 billion euros of doubtful loans and property assets. All this has allowed the bank’s consolidated profits to rise from 509 million euros in 2013 to 1 billion last year. And its operating profit grew even more, from 296 million euros to 1.4 billion.

But this improvement doesn’t seem to have made an impression on the markets, which continue to punish the stock more than any other, with the exception of Banco Popular. This is despite the fact that analysts’ consensus is largely in favour of buying and holding the stock (only a third of analysts recommend a sell). Bankia’s share price was around 1,5 euros at end-2014 and hasn’t stopped falling since then. It is now at 0,7 euros, which means it has lost more than half of its value in two years. This doesn’t appear to be just the result of the sector’s generally bad situation, but also to other factors exclusive to Bankia, namely the avalanche of lawsuits which are casting a cloud over its future profitability, for example the creation and use of the ‘black’ cards.

Given the current situation faced by the banks, not only the Spanish ones but all of them, struggling with toxic debt, devalued assets and increasingly narrower margins, it doesn’t look as if Bankia will recover its price level of 1.5 euros in the year and half it has left to December 31, 2017. This is going to be really bad for the FROB, which won’t manage to get back even half of the 22.4 billion euros it put in. Bankia’s stock market value is now 8.2 billion euros, so the State’s 60% is worth no more than 4.9 billion euros, or a bit more if it sells it to one buyer, to keep control and with a bit of a premium to the market price. The 1.3 billion euros already taken by the FROB would have to be added to this amount.

We are talking these prices. And of course the stock price could still increase in the 15 months left before the sale. However it looks increasingly likely that the State, if not the third parties, will end up losing much more than half of the money it poured into Bankia.

The message transmitted by Goirigolzarri a few days ago that the bank is redoubling its efforts to increase its profitability and be able to pay tax payers back is a show of wilfulness. Very few people, or indeed anyone, believe it. And this is serious given that up to now the State has only recovered 5% of the 52.4 billion euros of public funds earmarked for the bank, namely 2.7 billion euros.