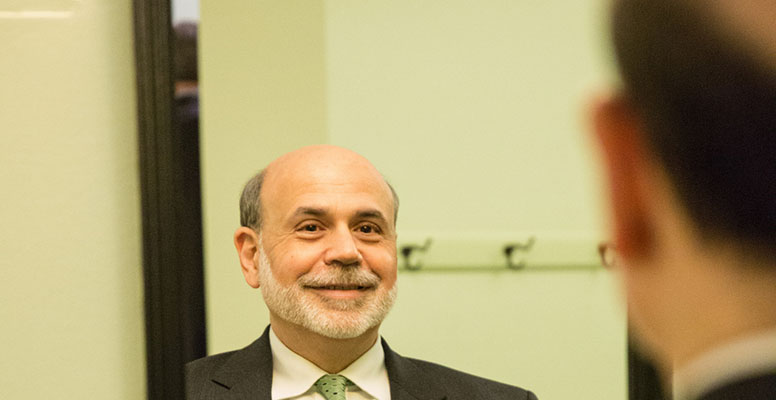 On the day that his book  “Courage to Act” was released, on Monday, October 5, 2015, he wrote an op-ed at the WSJ “modestly” titled How the Fed Saved the Economy?.The central bank did its job. What about everyone else?

For the first time in nearly a decade, the Federal Reserve is considering raising its target interest rate, which would end a long period of near-zero rates. Like the cessation of large-scale asset purchases in October 2014, that action will be an important milestone in the unwinding of extraordinary monetary policies, adopted during my tenure as Fed chairman, to help the economy recover from a historic financial crisis. As such, it’s a good time to evaluate the results of those measures, and to consider where policy makers should go from here.

He chooses to compare with Europe:

It is instructive to compare recent U.S. economic performance with that of Europe, a major industrialized economy of similar size. There are many differences between the U.S. and Europe, but a critical one is that Europe’s economic orthodoxy has until recently largely blocked the use of monetary or fiscal policy to aid recovery. Economic philosophy, not feasibility, is the constraint: Greece might have limited options, but Germany and several other countries don’t. And the European Central Bank has broader monetary powers than the Fed does.

Europe’s failure to employ monetary and fiscal policy aggressively after the financial crisis is a big reason that eurozone output is today about 0.8% below its precrisis peak. In contrast, the output of the U.S. economy is 8.9% above the earlier peak—an enormous difference in performance. In November 2010, when the Fed undertook its second round of quantitative easing, German Finance Minister Wolfgang Schäuble reportedly called the action “clueless.” At the time, the unemployment rates in Europe and the U.S. were 10.2% and 9.4%, respectively. Today the U.S. jobless rate is close to 5%, while the European rate has risen to 10.9%.

And wraps up with a bromide:

It is encouraging to see that the U.S. economy is approaching full employment with low inflation, the goals for which the Fed has been striving. That certainly doesn’t mean all is well. Jobs are being created, but overall growth is modest, reflecting subpar gains in productivity and slow labor-force growth, among other factors. The benefits of growth aren’t shared equally, and as a result many Americans have seen little improvement in living standards. These, unfortunately, aren’t problems that the Fed has the power to alleviate.