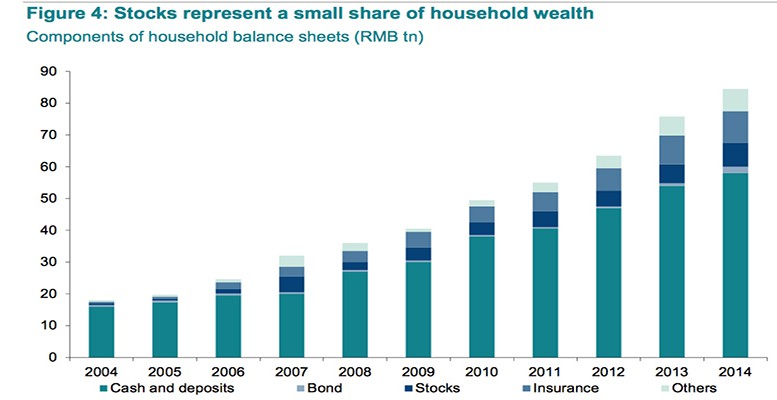 In terms of the impact on private consumption, we have to consider that equities only represent around 6% of households’ balance sheets (or 12% of Chinese household financial wealth). Roughly 90 million people, out of a total population of 1.3 billion, own stocks in China. This means that the negative wealth effect caused by the fall of the equity markets should be limited. Furthermore, if we look at absolute levels, the Shanghai composite index is still well above 2014 levels. Anyone who entered the market before April 2015 is likely to be still in the black, or at least breaking even.

If we look at the impact on financial stability, equity issuance also represents a small share of aggregate private sector financing (less than 5%). With policy support on top of that, this means that systemic risk in the financial sector should be well contained. The PBOC has many tools and the firepower to prevent serious contagion to the financial sector.

Generally speaking, our view is that the economic impact of the recent setback in equity markets should be muted. The consequence is on the other hand more negative regarding the rhythm of financial deregulation. Indeed, the active supportive intervention from policymakers bodes ill for the long-term goal to increase market forces in capital markets.

As for the macro picture, Q2 GDP growth on a yearly basis was better than expected, coming in at 7% (unchanged from Q1). On a quarterly basis, growth was also above expectations, at 1.7% q/q (vs. 1.4% in Q1). This improvement was mainly supported by the services sector, which benefitted from the boost in equity markets (at least until mid-June). Looking at monthly developments, the key indicators were also better than consensus in June.

Industrial Production growth increased to 6.8% y/y from 6.1% in May, and Retail Sales growth also improved. Investment growth stabilised after a year of declines. In the housing sector, surveys show that prices are stabilising (in month-on-month terms), thanks to an increase in sales and housing starts that continue to be subdued. The trade balance improved in June, with exports growth turning positive and imports contracting at a slower pace. Inflation and money supply growth increased more than expected, but remain at low levels.

Be the first to comment on "Chinese equity markets: Shaken, but not too stirred"