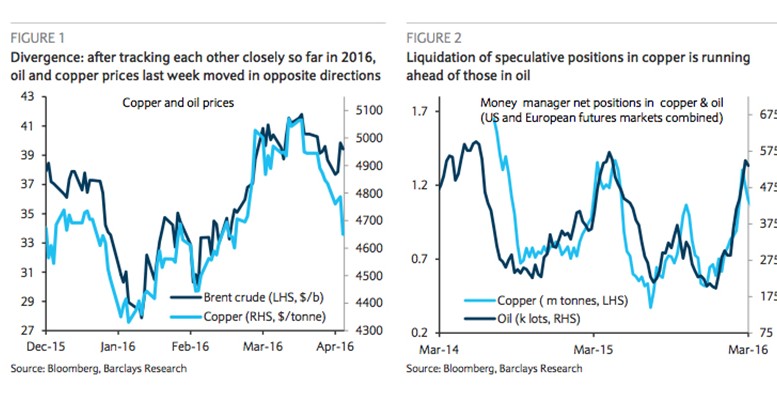 BARCLAYS | Copper and oil price moves had tracked each other fairly closely for most of the year but have diverged recently, as the supply-side support that has emerged for oil has not been replicated in the metals market. There is a risk that if recent supply-side support for oil fades, the demand weakness that copper is hinting at may become a more important price driver in the months ahead.

Supply outages and adjustments to output in response to lower oil prices are helping tighten market balances. However, the demand side remains much softer over H1 16 (1 mb/d forecast) than in H1 15 (average growth of 1.8 mb/d). The diesel overhang poses a risk to refinery runs over Q2: although large hopes are pinned on a healthy gasoline season, runs might be constrained because of the diesel market surplus, which could throttle the demand for crude and slow the pace of recovery in oil prices.

Although the physical markets for oil are turning constructive, due to the supply tightness, as reflected by time spreads, conviction remains neutral, given event risk. We expect better directional momentum to start after the April 17 meeting of OPEC and non-OPEC countries, although our expectation is for their actions to have a limited effect on supply, given that the producers that have the potential to grow output (Iran, Iraq) are not involved in the freeze.

US coal production will likely have its second straight year of production declines in 2016. Although stockpiles stand at some of their highest levels in recent years, fundamentals point to coal balances looking much tighter by year-end. Although the long-term sustainability of coal may still be in question, it would appear that coal prices may still have some life left in them. This is important because the rally could coincide with the correction in natural gas markets, meaning the two key fuels for US power generation are likely to find strength in tandem during 2017.