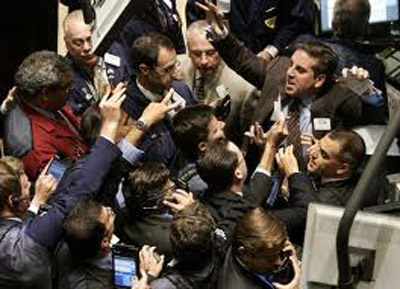 Markets rallied on Thursday after the ECB’s highly anticipated unlimited bond-buying program to contain the euro zone debt crisis. In the U.S, an upbeat job report and news from Europe made all three Wall Street indexes close at multi-year highs. However, some experts remain skeptical on how long the euphoria will last.

For Portfolio Manager at Euro Pacific Capital, Jim Nelson, the recent upside in risk assets is a case of “unjustified optimistic frenzy.” In an article titled “European Central Bank’s Bond Buying Changes Nothing,” Nelson explains that:

“Without significant fiscal support from the surplus nations (like Germany and the Netherlands) the bank will accomplish little more than spinning its wheels. And while there is no certainty that such support is forthcoming, any support that does materialize will likely not be in a form that will provide any short-term boost for the stock market.”

For Nelson, the fact that the bond buying is linked to aid programs is decidedly negative for equities.

Other analysts are pointing out that even if the central bank’s program will not solve the deep structural problems of the euro, it will certainly buy time for the 17 euro zone countries.

On the U.S. domestic side, the positive data was seen as a preview of what the employment picture looks like with Friday’s monthly jobs report. The White House is expected to report today that employers added 120,000 jobs in August. Investors will be paying especially close attention to the figure, since it will likely influence the Fed to announce or not more quantitative easing at its next meeting on Sept. 12-13.