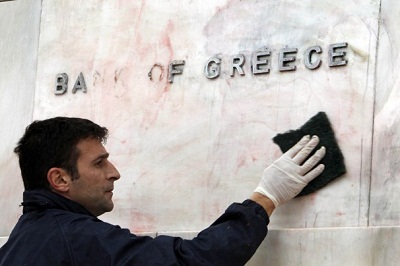 By Begoña Castiella, in Athens | How could one of the poorest, smallest countries in the euro zone endanger the common currency? How could 300 members of the Greek parliament from five political parties and with allegedly little economic knowledge paralyse during two years reforms and budget adjustments that were urgently necessary to reduce the nation’s public debt?

And despite two bailouts and a bond restructuring that has cut down in more than half its outstanding public debt, how is it that Greece’s economy experiences no improvement?

Maybe one has to begin by admitting that Greece, a country whose culture sets the basis of European civilization, came in the early eighties in the then Common Market not on merit but on political grounds: it was the making of Constantinos Karamanlis and Valery Giscard d’Estaing, seven years after the military junta era had ended. And so it happened with the euro zone: the then Socialist prime minister Costas Simitis succeeded in pushing his dream and in January 1999 Greece joined the other 16 countries of the euro area.

Everybody in Brussels knew that this country (and some others) had been very creative with your stats then, as they were afterwards, too. Only in October 2009, when the Socialist George Papandreou had won a landslide election, the first serious warning came from Brussels: Hellenic figures were unreliable and public debt was much higher. On December 8 the Greek stock market plummeted and the European Commission and European Central Bank called for measures that Papandreou announced on January 5, 2010, featuring a Stability Pact to reduce the deficit.

It was approved by Brussels but in Athens there was little progress on the issue of structural reforms and by April the Greek bond yields spiked above 10 percent. Bad, very bad news. The world began to speak of the Greek danger of bankruptcy and its contagion effects over the euro area. The first bailout was approved on May 2, with a loan of €110 billion, of which the EU will put €80 billion and the IMF will add the rest. This would enable Greece to reduce its public deficit and pay credit obligations without having to buy credit on the markets to finance its needs at some astronomical interest.

The parliament then adopted an austerity plan. Cuts were applied to salaries and pensions and there was an increase in direct and indirect taxes. But the giant public sector reform, with layoffs and closures of unprofitable public enterprises, remained untouched. George Papandreou and his government didn’t have the ability or the support to effectively fight against thirty years of corruption and influence peddling, along with a bureaucracy initiated by Andreas Papandreou since his election victory in 1981.

While the credit agencies downgraded the Greek bonds to a no-investment level, Greece began receiving the first tranches of aid while the Troika (the European Commission, the European Central Bank and the International Monetary Fund) required further cuts and reforms. The fiscal system remained the major unresolved issue: the state has raised little income form taxes, as it has never been able to meet annual budgets for over 30 years now.

Last summer, Papandreou had to introduce a new austerity plan to save €28 billion by 2015 and privatise state property. The programme was voted only by the Socialist majority without support from other parties and the EU announced a second rescue package of €130 billion and what is more important, it removed about 50% of Greek outstanding debt with the involvement of the private sector (banks, insurers, investment funds etc.), that is €107 billion. In Greece the population still did not understand the seriousness of the situation: reforms were stalled, left wing parties and trade unions opposed cuts and the Conservatives did not help.

Papandreou announced by surprise that he could not continue without the support of the people and offered a referendum, but eventually was forced to resign. Revised statistics confirmed that the country had been in recession already in 2008. A coalition government formed with the participation of the extreme right along with socialists and conservatives, all commanded by an economist and banker of impeccable international career, Lukas Papadímos. The 2012 budget required by the troika was approved. The parliament passed a tough adjustment plan that finally includes state sector layoffs and a minimum wage reduction, further cuts in pensions and closure of public enterprises. The eurogroup, therefore, opened part of the second bailout bag (ousting away the danger of a default on March 20) and haircuts on the Greek public debt were agreed.

But markets and risk agencies do not believe that things will get better and talk of bankruptcy, a selective one this time. The recession continues and Greek GDP has contracted by 7%, while 20.9% of the population is unemployed (in a country of 11 million with less than 5 million people with jobs). The lack of political honesty of the Greek parties has put the blame of the cuts and reforms on the Troika and Angela Merkel. The Germans are seen as oppressors who impose harsh measures and sink into poverty and despair Greek families, while the Greeks are seen as irresponsible spenders who waste the money of others and do nothing but complain and demonstrate violently.

The EU forecasts Greece will have this year a contraction of at least 4.5%, perhaps 5%, will remain stagnant in 2013 and only may have growth in 2014. Of those working in the private sector, one in three does not get his salary on time or has seen a reduction in hours and wages. All Greek families have seen their incomes reduced by at least 30% and increased taxes. The Greek political world is in crisis, obsessed with the general elections in late April or early May while there is no liquidity in the market. Greek banks must be refinanced (the Eurogroup approved €23 billion last week) and no one dares to invest in Greece for fear of bureaucracy, corruption, lack of implementation of laws passed and the slowness of the judiciary.

Let’s see who solves this problem: less income, less liquidity and less taxes collected means less economic activity, recession and more unemployment. The more austerity, the more injustice and threats of social explosion. Note to other countries at risk of default: austerity measures to improve Greek public finances and overcome the crisis have so far not generated growth in Greece.

Be the first to comment on "Still no growth in the horizon for Greece: the story so far"