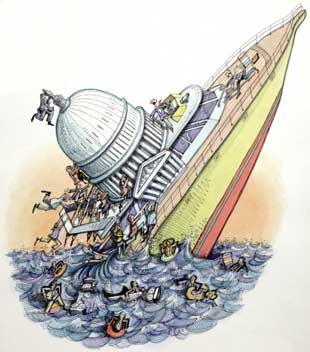 By Luis Arroyo, in Madrid | Here is a consistent interpretation on the Marginal Revolution blog, by Tyler Cowen of Bernanke in 2008. It is consistent with economic and political circumstances.

“How is that for self-recommending? Here in a short paragraph is my current take on where Ben Bernanke would differ from Scott. As the shadow banking system was imploding in 2008, due to a downward revaluation of collateral, nominal gdp stabilization would have required that the Fed resort to the medium of currency printing on a very large scale.

“Scott favors such a move.  Bernanke would worry that the collapse of (some) intermediation would mean you get most of the output losses anyway, while the printing of currency would create subsequent problems with management of expectations, relative sectoral shocks (currency is only a partial substitute for credit), and medium-term adjustment once the smoke has cleared, not to mention political relations with Congress and interest groups within the Fed system itself. Therefore Bernanke didn’t want to do it, even though in principle he likes to see nominal GDP stabilized, and has written and said as such.

“I am not suggesting that Scott agrees with this perspective.”

I like it because the priority he proposes is to stabilise the broken financial system: assets have collapsed, there is no collateral to demand liquidity, the interbank market has vanished and no one trusts anyone. A case in point, as any other in which liquidity disappears. As The Economist‘s Bagehot column writer would say, it doesn’t matter if the cause was a poor harvest, an external payments crisis or anything else. The result is that liquidity has faded away and we must cover that hole at all risks.

Once the financial system has returned to a stability mode, one can think about applying monetary policy in order to achieve price stability, prices and employment stability, and so on.

But, is the financial system stable? There are signs that in Europe it still is at pains. And in the US, the scenario looks odd, above all if we note this strange fact of the real interest rate being less than zero. That means there is still over-abundance of demand for Treasury bonds, a hedge position against uncertainty. In the demand volume for bonds there are foreign central banks such as China’s, American Banks and the world’s (when will the banks stop investing in bonds and go to venture capital?), the Federal Reserve for monetary policy reasons, and private demand.

Currently, that demand is greater than the already massive US government’s offer. Yet, the issuance only increases. It is a time bomb, and it is obvious. Now, the stock market rises and private investors abandon Treasuries to buy shares, which will result in more growth (ceteris paribus) and more revenue, less financial needs …but we cannot be completely sure of that correlation. Tax revenues would have to go up for the deficit gap to close. The forecasts do not point at that direction. According to the most balanced calculations, in 2020 the US will have a public debt of more than 120% of GDP. So in a not too distant future, if public debt keeps uncontrolled, there may be a bond bubble big like houses. The US may be living a positive transition toward more growth, but its debt, necessary for the private sector to swallow the deleveraging pill, threatens to explode at some point (or bring up a nice inflation trouble). Not before, of course, Europe does.