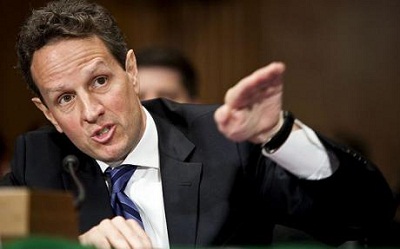 NEW YORK | There has been a lot of anxiety in the US with the European crisis, no doubt of that. The New York Times has published an enormous amount of editorials (not counting Krugman’s op-eds) complaining about Merkozy not increasing the firewall enough to contain contagion from Greece and saying that they were not putting any measures in place to tackle the lack of growth in the southern countries. Barack Obama has given public and private advice to European leaders, that some times answer back in a mind-your-own-business dear Barak kind of mode.

But the most intrusive in giving this friendly advise has been US Treasury Secretary Timothy Geithner. He has travelled to a lot of those plentiful European meetings, summits and bilateral rendezvous.

His message to Europe has always been clear enough: we Americans do not want another Lehman Brothers moment back. Try to avoid a Greece bankruptcy first, then spend some of your money (you have it, Germany, France) and build a proper firewall in case the worst happens to protect Portugal, Italy, Ireland and Spain. And do not asphyxiate those or any other economies with draconian austerity measures. Please.

He has done it before, and repeated it on Tuesday, in remarks prepared for delivery to the US House Financial Services Committee.

“The most important unfinished piece of the broader financial strategy is to build a stronger European firewall to provide a backstop for the governments undertaking reforms,” Geithner said. “Economic growth is likely to be weak for some time. The path of fiscal consolidation should be gradual with a multiyear phase-in of reforms. If every time economic growth disappoints, governments are forced to cut spending or raise taxes immediately to make up for the impact of weaker growth on deficits, this would risk a self-reinforcing negative spiral of growth-killing austerity.”

US economy is improving: GDP growth is picking up, expected to be around 3% this year (remember that it was falling almost 9% only three years ago); unemployment is slowly receding (8.3% last measure); housing market is improving, so is confidence; banking stocks are up again. They do not want a ripple effect coming from the other side of the Atlantic spoiling what they have spent so much money (trillions of dollars in bailouts, quantitative easing, tax incentives) to obtain. And they do think that the recipe for a success on how to cope with the crisis involve spending, not only austerity. They like to talk about bazookas and firewalls, you know, those Americans…