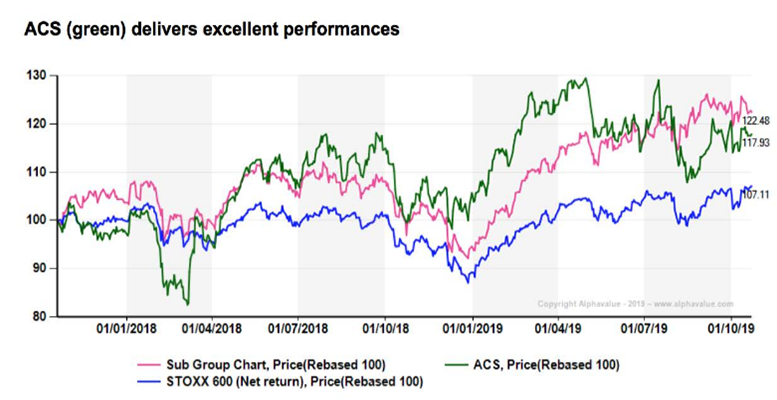 Alphavalue | A key of ACS is the management’s ability to copy Vinci’s business model (add, target € 114) in the Anglo-Saxon world, thanks to the expected complementarity between Hochtief (German construction company) and Abertis (highway concessionaire).

Exploring complementarities is at odds with the ACS strategy of being a fully decentralized group to access markets that would otherwise be inaccessible to international companies. They also tiptoe on how to manage Abertis with its partner Atlantia, in a joint purchase of € 18 bn.

Maintaining a knowledge of the local reality obviously makes sense for the business of construction and industrial services. Even so, replicating the Vinci model while preserving the autonomy of local operations is an ambitious and hard work that is achieved with greater difficulty when there are minorities in key businesses (Cimic, 72% in the hands of Hochtief, Hochtief 50.4% in the hands of ACS and Atlantia 50% held less 1 share per ACS).

Since it is present worldwide, ACS is certainly protected against oscillations in local construction cycles. However, the concept of a “larger” group is difficult to achieve as an essential element of a business model, since ACS sales are close to those of Vinci but with a market cap five times smaller. This has positive consequences when it comes to ROCE (return on capital employed).

The company has created value since 2011, with a ROCE of 22% in 2018, above its WACC (weighted average cost of capital) of 9.5%. It is the highest ROCE in the sector, thanks to its capital-intensive business model (capital -light business model) for the construction sector mainly due to a negative working capital (working capital). While the negative working capital stands out, strict management and rigorous cash management, does not neglect a fairly confusing equity base. The history of European construction companies is plagued by large projects that failed and spoiled the benefits of the previous five years.

ACS’s message to the market has been well received, as evidenced by the following graphic where ACS (in green) is almost a coincidence for a universe of comparable (in pink) that includes Vinci and EIFFAGE (buy, target € 127).

Linking ACS with similar peers than Vinci will favor the Spanish company. Similarly, the DCF based on the Group’s Ebitda generates high target prices to the extent that it is difficult to deduce the future valuation of minorities from the present value of FCFs (free cash flows). The same comment can be applied to NAV valuation: are we missing debt and minorities? Even with these warnings, the upside is an attractive + 40.8%.

It can be affirmed that ACS is a formidable effort of a single man, Florentino Pérez, in an artisanal financing. This explains a remarkable financial performance and a positive recommendation, provided that the discipline of cash prevails. However, becoming Vinci is difficult and it will take time.