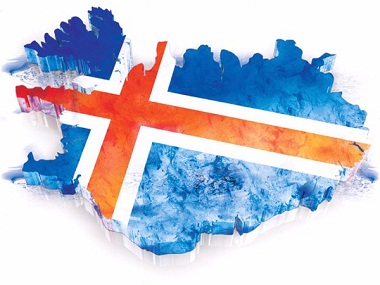 By Julia Pastor, in Madrid.- Since last week, Iceland debt is no longer rated as junk bond. Fitch raised the country’s rating by one notch, from BB+ to BBB-. This fact has sparked a significant number of comments about whether the way in which Iceland has managed the economic crisis is a model for other  European countries, particularly the peripherals. It is undeniable that the actions taken by the so far Iceland against the crisis are unique.

It was the first European country, much earlier than Greece, suffering social riots with citizens throwing stones at the Parliament’s building. No country in the world has brought to court its prime minister as the main responsible for the national bankrupcy, or preferred to rescue taxpayers’ savings rather than to rescue bank’s assets. Even more surprising, Iceland’s households have forced financial entities to cancel their debts. According to Bloomberg, which quotes the Icelandic Financial Services Association, from 2008, the country’s banks have cancelled loans valued at 13% of GDP, thus reducing the indebtedness of more than a fourth of the population.

“It can be said that Iceland has registered the world record in domestic debt reduction. Iceland just followed the essential instructions to get out of the crisis. Any economist would agree with this.”

Fitch’s debt upgrade of Iceland comes after a long and severe adjustment period which entailed a 2011 GDP growth of 3%. Furthermore, the country left behind the external aid from the IMF.

Is all this enough to say that Iceland is a model to be followed by the most battered European countries such as Spain, Italy, or Ireland, Portugal or Greece? The daily Expansión questions the so called Icelandic miracle on its Tuesday edition.

The Spanish newspaper says that

“Ireland saw its deficit fall to 32% of GDP after the state assumed their banks’ toxic assets in 2010 […] Iceland’s Finance minister himself, Steingrímur J. Sigfusson, has warned many times that it would not be easy to extraplolate his recipe, though. Sigfusson explained that Iceland did not rescue their banks because it was not able to do so. Letting the banking system fall was an extreme answer. He also said that ‘Iceland should be humble, avoiding to assess other countries, particularly on banking affairs.”

Iceland’s starting point was different from any of the euro zone countries’: it was a ‘small’ economy of a €8.5bn GDP in comparison to Greece’s €240bn GDP, and so was its rescue size; it also had its own currency and was dependent on the IMF but not on the EU partner countries.

Expansión stresses that Iceland has not solved all its problems. For instante, the conflict with Great Britain and The Netherlands caused by the Icesave collapse. Both countries claim that the entity should return the savings deposited in this entity by their citizens, blocked since 2008. On the other hand, Fitch believes that Iceland has not been much affected by the euro zone debt crisis and surely will avoid the recession, but the growth slowdown will affect the country, nonetheless. Icelandic private sector is also extremely indebted.

Some analysts insist that Fitch rating upgrade places Icelandic  a step ahead of Ireland, which still maintains the junk bond rating. But the Wall Street Journal seems to agree that this misrepresents the future:

“Iceland still faces tests. Capital controls, put in place during the crisis, are a barrier to investment […] Ireland’s policy choices have been constrained by the euro. But its recovery has been damaged by the euro zone’s poor crisis management, which has dragged down the whole currency block’s economy. Longer-term, euro membership should help Ireland lure investment and boost exports.”