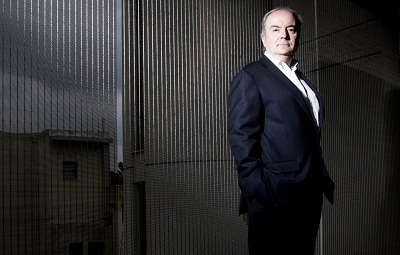 By Begoña Castiella, in Athens |Yorgos Peristeris is CEO at the Greek construction company Gek Terna and chairman of Terna Energy, specialised in renewable energy. Peristeris smiles from his desk at the top floor of the company’s headquarters, an interesting building designed by Michael Hopkins in Athens. Gek Terna is a renowned construction company, while Terna Energy is the first Greek renewable energy company working outside Greece, although both are listed on the Athens Stock Exchange.

Peristeris does not lose his smile, not even when talking about the constant tensions between the construction and renewable energy industries and the Greek government. In these times of crisis and lack of credibility, his projects are focused abroad, where there still may be a chance of getting funding.

“Right now, no one comes to Greece to invest.” Peristeris tells me that the Spanish company with more success in the country is Zara.

The basic problem is funding, indeed. Peristeris thinks that the financial squeeze the country is going through should bottom out in summer and the situation will improve next semester. But he is optimistic because his two new projects of wind farms in Crete and reserve energy systems in Kastraki are consistent at a commercial level and so look attractive to European financial institutions, including German capital.

“There is no funding for Greece at the moment, private or from foreign banks. We have to wait for the re-negotiation of the Greek debt, the capital injection from the second bailout, and the re-capitalisation of the Greek banks. We depend on the credit ratings awarded to Greece. I hope that things will improve, but nobody knows.”

And so his company looks abroad: “One reason why we have accelerated our investments in renewable energy outside Greece is obviously due to the Greek situation.”

Yet, he does not exclude selling his operation in the US after subsidies for renewable energy have run out and because Terna Energy is not a US company.

“We have to explain ourselves much better now to the banks,” he adds. “Bankers generally have a short-term vision. Before the crisis, we had no difficulty at all in getting funding. Now, with Greece in crisis and with daily negative headlines in the media, our life is more difficult.”

Projects, Peristeris says, require letters of guarantee and further banking documents than ever. Greek banks, though, not only cannot offer these guarantees, they cannot get themselves loans, as they remain linked to the country’s rating.

He does not want to leave Greece.

“Greece is getting much better. This crisis has helped to start dismantling the excessive machinery of the state and the unions. Now, their wasting resources is out there, for everyone to see. Reforms are on their way, even against so much incompetence.”