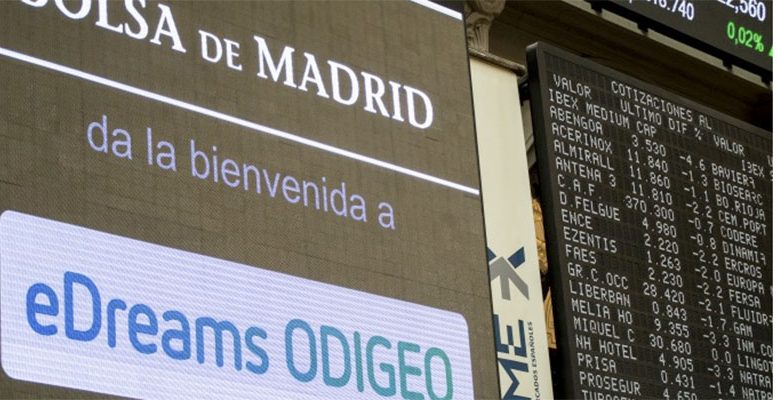 Barcelona-based on-line agency eDreams, is an investment opportunity, according to Bankinter analysts. They offer three reasons: it is trading at much cheaper multiples (more than half) than its peers. The range, applying reasonable multiples, is slightly higher than the current one but much lower than the sector. So it has substantial potential.

eDreams-Odigeo operates with the following brands: eDreams, Go Voyages, Opodo, Travellink and Liligo. Bankinter analysts believe the company is more of a tactical than a strategic investment, given that its multiples are significantly lower than the sector.

“eDreams is trading at 6x Ebitda, while the sector is at double digit levels (EV/Ebitda’16 of 17,5x). If we look at the PER, the differential is considerably wider (the estimated PER for 2016 is 12x vs an average 30,2 x for the sector).”

As a result, there is an opportunity in terms of price, according to Bankinter experts:  The smaller size of the company justifies a certain discount (-20%?), but not the current one: -60% in estimated 2016 PER and -66% in estimated 2016 EV/Ebitda.

On the other hand, eDreams has been reducing its high gearing. Net financial debt represents 0,9x of shareholders funds (March 2016). Its Net Debt/Ebitda ratio was 3,4x (also in March 2016) and it should reach 3,1x this fiscal year. That’s a considerable improvement on the 3,9x registered in 2014 when the company made its stock market debut.

A good moment for its business

eDreams stock market performance has been very favourable since the start of the year (+52% ytd), partly supported by the tourist sector’s momentum. Bankinter believes that there will still be a positive headwind for the sector over the coming months. The gap between eDreams’ share price performance and the Ibex 35 has increased since March 2016, but it still has upside to reach its April 2015 levels. Despite Brexit, the flow of foreign tourists continues to increase. That can be seen in the latest figures from Aena. Passenger traffic grew 10.3% in September from a year earlier and 10.8% year-on-year in the first nine months of 2016.

The economic and political instability in some tourist destinations (Greece, Egypt, Tunez an Turkey) favours demand for holidays in Spain and the US. For its part, the hotel sector improved its occupancy rate this summer (79%, the best level since 1999) and the rise in prices points to a good end-of-year(increases in RevPar).

“Looking ahead to 2017, it’s a good moment for the sector thanks to a recovery in consumption, a decline in the number of unemployed, improved financing conditions and the finalising of plans to divest in order to cut debt and fuel the revaluation of real estate. In summary, against a favourable backdrop for on-line travel agencies in general, eDreams is very attractive from a valuation point of view compared to its competitors.”

The fact that eDreams is relatively smaller than its peers (market capitalisation of 303 million euros vs a 3.785 billion sector average) and its multiples are more attractive, increase the allure of the company as a possible acquisition target.

“If this were to happen,  we think it would be with a substantial premium to its current share price. This possibility makes the stock more attractive.”